Foreign institutional investors and speculative local individuals have traditionally been the big players in Asian equity markets. Stefanie Eschenbacher finds this is changing as countries are starting to develop their pension systems.

In autumn last year, the birth of one child brought the world population to seven billion people.

Ban also stressed the “moral and pragmatic obligation” to do the right thing for him or her.

The world’s population reached six billion in 1998. It is expected to grow to nine billion by the middle of this century, possibly sooner.

Discussions around demographics have long focused on population growth and the question whether the world has sufficient resources to sustain its growth rates.

But a fact that went largely unreported is that the world, particularly Asia, will also have to deal with a rapidly growing number of old people. In Asia, many people are still outside the formal pension system.

While individuals’ savings rates are high, pension coverage is low.

As the problem becomes more pressing, Asian countries have begun to address the problem. China’s twelfth Five-Year Plan, for example, includes measures on how to allocate resources to pensions, healthcare and education.

A recent report by HSBC Global Research, entitled Asia buys Asia … and how this changes market dynamics, analyses how the development of local pension systems affects the region’s equity markets.

It suggests that the development of the pension system can act as a catalyst to increase Asia’s appetite for liquid financial instruments, such as equities.

This trend will be more pronounced in some countries than in others, but most are likely to see a higher demand for equities.

APG, which manages about €229 billion ($282.2 billion) for the Netherlands’ civil servant pension scheme ABP, has gradually increased its allocation to Asia. 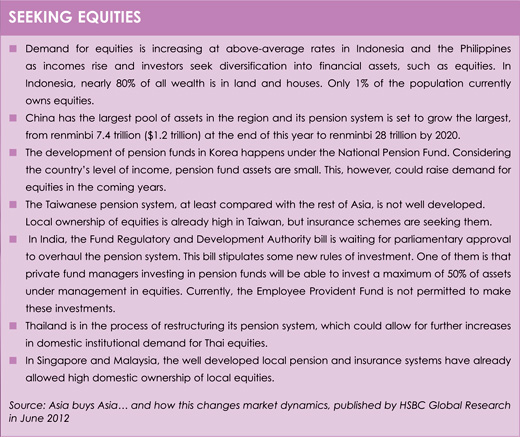 About 10% of APG’s total assets under management, approximately €302 billion, are invested in Asia, with half of it invested in emerging Asia.

“With regard to emerging markets, China and India remain our main focus for expansion. We are also exploring opportunities in Southeast Asia, for example, in the Philippines and Indonesia,” says Hazeleger.

“We believe it pays off to be selective in emerging markets in general, as opposed to following the herd when it comes to investing in certain companies and sectors in different market environments.”

If Asian pension funds and other institutional investors enter the market in greater numbers, this is likely to change market dynamics.

Bill Maldonado, chief investment officer, Asia Pacific, at HSBC Global Asset Management, says institutional investors that are coming into less developed markets would help to reduce the volatility and increase stability because they tend to be longer-term investors and more valuation-driven.

Hazeleger adds that investors demand sufficient compensation for taking institutional, environmental, social and governance risks. “Add the risk of overpaying to this and one will understand it simply takes time to increase portfolio allocations,” he says.

Although APG Asset Management Asia invests across asset classes, the Asian exposure is the largest in real estate and emerging market equities.

The investment focus for infrastructure and real estate is primarily on core assets, which it expects to generate attractive long-term risk-adjusted returns through stable income and upside through capital appreciation.

Hazeleger says: “In the liquid markets in equities and fixed income space we see the rapid growth and development of capital markets in Asia as opportunities to increase our total capacity in emerging markets and benefit from regional diversification.”

HSBC Global Research predicts that Indonesia, the Philippines and China are likely to see the highest increase in demand for domestic equities from pension funds.

The way demographics change and how pension funds respond as a result, could have a significant impact on markets because of the amount of assets they manage.

A couple of years ago, Feng Wang, director at Brookings-Tsinghua Center for Public Policy in Beijing, was already critical of how much attention was focused on China’s economy, on its energy and resource needs, and on environmental consequences of rapid expansion.

The same applies for other countries, not only in Asia.

Wang says: “A gradual but substantial reduction in population, especially with a concomitant aging of populations in the world’s richest countries, constitutes an unprecedented shift that is redefining the global demographic, economic and political landscape.”