There are 300 million people over the age of 65 in Asia, a number that will probably reach one billion by 2050.

The percentage of retirees in the six main countries of the Association of Southeast Asian Nations (Asean) alone is expected to almost double in the next two decades, tripling in more than 40 years.

Elsewhere in Asia, the population aged 60 or above in China is forecasted to grow by 100 million by 2030.

“Asia is getting old and it is getting old fast,” says Michael Dommermuth, president at Manulife Asset Management Asia. “What occurred in the West over the course of a century will occur here in just 40 years.”

What distinguishes the Asia Pacific region from others is that pensions coverage tends to be low, but personal savings rates high. And a large part of the social security for Asean’s ageing population still comes from investment or savings programmes outside the formal pension system.

There are a number of different models of pension systems in the Asia Pacific region, with variations of defined contribution and compulsory comprehensive savings. “If we want to be a leading player in the asset management space in Asia, we must help our customers to secure retirement,” says Dommermuth. “The one focus for us must be retirement, both how to accumulate and decumulate assets.”

Dommermuth says his team in Asia uses the expertise gained in the United States to help inform local governments of the importance of pension reform and asset allocation. 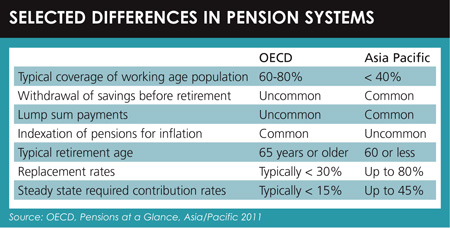 In Malaysia, Manulife Asset Management Asia was appointed as one of eight providers of the private retirement scheme. This is a voluntary long-term investment scheme, designed to help individuals accumulate for retirement. A total of 29 companies registered their interest to become a provider.

Whereas in the Philippines, the financial retirement solutions are delivered through its affiliate’s investment-linked platform. Dommermuth says the Asian fixed income capability was modified to meet the local regulatory requirement. In May, the capability was also made available on the Hong Kong MPF platform.

And in Singapore, where it appears that clients prefer delivery in Singaporean dollar, special share classes are being explored.

One product range Manulife Asset Management Asia is currently adapting for the Asian market is life cycle-type funds, which Dommermuth says have proven successful in the US 401(k) retirment savings market.

“Appetite for low volatility increases with age,” says Dommermuth, adding that while Asian fixed income plays an important role for pension funds their significance is broader than that. 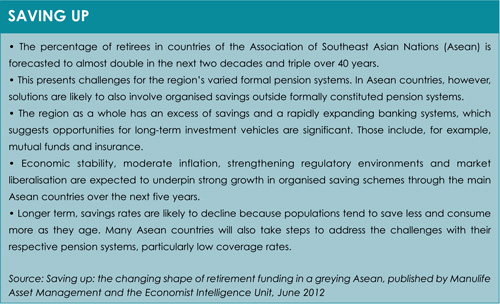 More recently, it opened its Cambodian head office in Phnom Penh. It also signed a distribution deal with PT Bank Danamon Indonesia, one of the largest banks in Indonesia.

“Having that local footprint is not just about achieving outperformance,” Dommermuth says. “Having people on the ground gives us an understanding what drives these markets.”

To access China, it took a 49% stake in Manulife-Teda. The joint venture was established in 2002 as a Chinese-foreign joint venture.

Manulife Asset Management Asia has yet to establish a presence in India, but it has an investment sub-advisory agreement with Kotak, which advises on the Indian investments. “In India we do not have an on-the-ground presence although we acknowledge the importance of India, particularly in the strategies we manage” he says.

“In our Asia Pacific strategies, India is a rising component.”