Returns far greater than those in other regions are luring lenders into Asiaâs securities lending markets. Judith Evans finds that South Korea, Taiwan and Malaysia may hold the greatest untapped potential in the short to medium-term while China and India remain frontier territory.

With securities lending still in flux after the financial crisis, and question marks over its future in Europe and the US, borrowers, brokers and beneficial owners are increasingly looking to Asia’s mid-sized and emerging markets.

For example, both Citibank and JP Morgan established securities lending services in Malaysia during the past year.

“Although lending volumes and values are much lower in Asia, the much higher average fees per loan ensure that the revenue generated can be substantial,” says David Lewis, senior vice president at SunGard’s Astec Analytics information service.

Lending securities in Asia generated fees of about 150 basis points per trade on average during the second quarter of 2013, with Taiwanese fees coming in at a healthy 339.99 basis points and South Korean at 218.70 basis points, according to data provider Markit.

EVOLVING
By contrast, the average fee to borrow US equities has fallen to 56 basis points.

Meanwhile, in 2012, when counted together, the main Asian countries produced about 74% of revenues generated by equities issued in Europe, says SunGard.

“Markets like Malaysia and Taiwan are currently at the forefront of this trend as market participants seek to diversify and enhance their revenue streams.”

Many Asian regulators have historically restricted securities lending because of its association with short selling, although borrowed stocks can also be used for other purposes.

They are also wary of risks associated with collateral reinvestment that emerged during the 2008 financial crisis. These, together with a decline in hedge funds, dealt a serious blow to the industry.

But Asian authorities have enabled securities lending to continue its development, recognising its role in boosting market liquidity and creating new revenue streams for beneficial owners.

The region’s markets are dominated by Japan, which has been reanimated by prime minister Shinzo Abe’s recovery plans and a weak yen.

Markit data shows that more than $40 billion was on loan as at the end of June in equities.

INTERNATIONAL LENDERS
Hong Kong, where H-shares are used as a tool for betting against Chinese companies amid predictions of slowing growth, had $24 billion on loan. 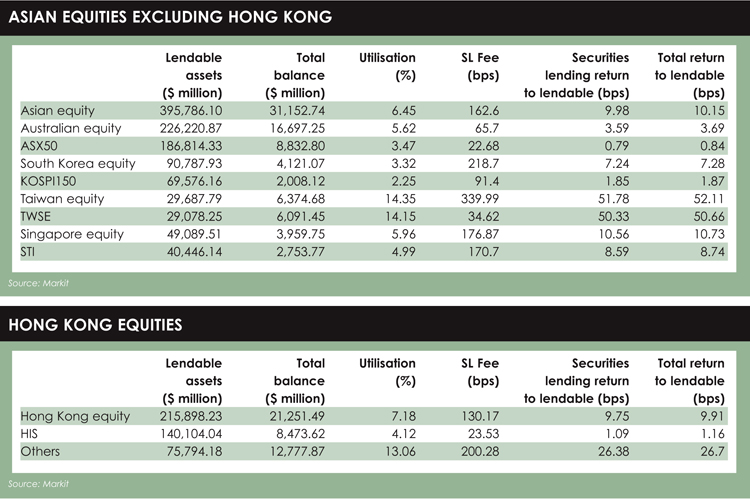 Taiwan had $7 billion on loan in its electronics-driven market where most loans relate to the supply chain for personal computers, says Zubair Nizami, Asian head of trading for securities lending at Brown Brothers Harriman.

South Korea, where a short-selling ban was lifted in 2011, had $4.8 billion of equities on loan, meaning that South Korea and Taiwan each exceeded Singapore’s $3.9 billion.

The nascent Malaysian market came in at $200 million, but major international lenders have begun offering securities lending services there: JP Morgan entered the market in mid-2012, calling Malaysia a “key value-add” for clients looking to diversify.

In July, Bursa Malaysia, the country’s stock exchange, widened the list of stocks eligible for borrowing and lending to 171 from 100.

“With these seen as some of the more developed markets in the region, it seems that beneficial owners are more comfortable to lend there compared to the other emerging markets,” he adds.

INTEREST
Asia’s mid-sized markets have their idiosyncrasies. For example, both South Korea and Taiwan impose stiff penalties for failure to fulfil trades, says Lewis, meaning that beneficial owners are reluctant to lend more than a small proportion of their lendable securities.

Taiwan currently requires 140% collateral from borrowers, a fact that astounds some newcomers to the market, while there is also a daily short-selling limit.

Further reforms would boost Taiwan’s lending volumes, says Nizami. “Taiwan continues to generate a lot of interest and there is still room for more reforms to the securities borrowing and lending system, which could increase market participation even further.”

McCardle notes that “there is a bigger requirement for system flexibility [than in other regions] to take into account the nuances of the individual markets”.

Like their larger neighbours across the region, Taiwan, South Korea and Malaysia are dominated by non-cash collateral.

All three markets are based around exchange-style transactions using a central counterparty (CCP), rather than the over-the-counter (OTC) bilateral trades that are standard in Europe and North America, although all three now also allow an OTC option.

There is “a cultural change in that you don’t have possession or control over the collateral,” says Lewis.

There have been repeated warnings over potential collateral shortages in the region thanks to new European and US regulatory requirements.

But a boom in collateral optimisation – in which algorithms are used to allocate and substitute collateral – has helped to mitigate squeezes so far.

“By adjusting business and operational models in this way, the market should be able to address those concerns.”

Alex Soane, collateral business analyst at SunGard’s Apex Collateral, notes that “historically, many Asian institutions do not have the same access to high quality collateral assets, such as government bonds, as some European or US counterparts. 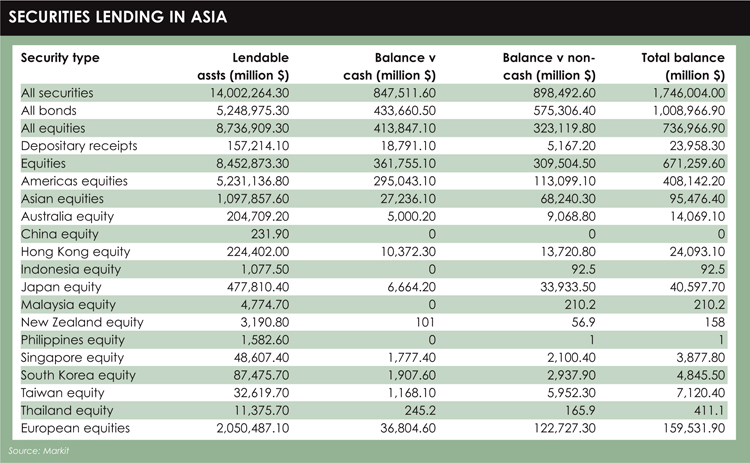 “However, they are, in many cases, better capitalised than most other regions,” he says.

The relaxation of liquidity coverage ratios required under Basel III rules, and the extension of timelines for implementing them, are good news, he adds.

But the fact that CCPs will only accept highly liquid assets as collateral means there will still be a liquidity squeeze.

Nevertheless, even as Europe warns of potentially catastrophic results from a planned financial transaction tax, the mood in Asia is optimistic.

Aashish Mishra, of Citibank India, says he expects Korea, Taiwan, Hong Kong, Singapore and Malaysia to “continue to offer attractive revenue opportunities for lenders, which should ensure healthy liquidity levels in the market”.