The increasingly unpopular internet censorship in China is a major obstacle for those with a global social media strategy because the worldâs largest networking sites remain blocked. Stefanie Eschenbacher investigates.

Underlying mistrust of the government-controlled media has been the main driver behind the staggering growth of social media in China.

Chris Ip, a partner at McKinsey & Company and co-author of Understanding social media in China, says many Chinese are sceptical of formal institutions and authority. As a result, they disproportionately value the advice of opinion leaders on social networks.

“Social media is a source of information that is, in many cases, more trusted than the news,” Ip says. “In China, posts are deleted if they are deemed sensitive so consumers constantly engage because they are worried that they will miss something.” 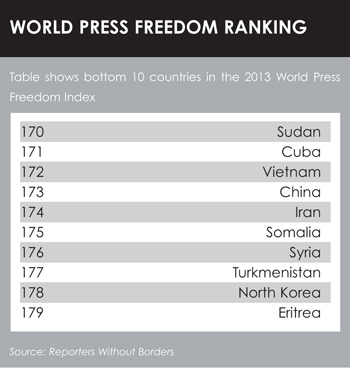 Reporters without Borders, a non-profit organisation which defends freedom of information, ranks China 173 out of 179 countries in its 2013 World Press Freedom Index.

“China shows no sign of improving,” the organisation says in the latest assessment. “Its prisons still hold many journalists and netizens while increasingly unpopular internet censorship continues to be a major obstacle to access to information.”

THE GREAT FIREWALL
What does life look like behind what critics call The Great Firewall of China?

Some 597 million internet users make China the largest user base in the world, and twice as large as that of the US.

The Chinese are also the world’s most active users of social media. Of those who use the internet, 91% are active on microblogs, networking sites and other online communities; 88% of those who use social media have multiple accounts.

And with 46 minutes a day spent on social media, compared to 37 minutes in the US, Chinese users are also the most engaged ones.

Ari Silverman, also a partner at the consultancy and co-author of the report, says China is huge, complex, far more engaged and personal than in other countries. 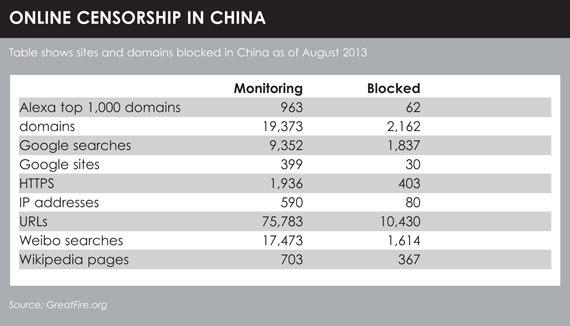 “Chinese are heavily influenced by social media and there is a cultural over-reliance on friends, family and word-of-mouth recommendations,” Silverman says.

This applies to purchases of everyday goods as much as to financial services. Comments – positive or negative – can be reposted as much as 50 million times, Ip says, compared to five million times in the US.

Go-Globe.com, a web application design and development company, found that the volume of sharing has increased by 60% last year.

“This offers tremendous opportunities but also a real risk for businesses in China,” Silverman says.

Data from GlobalWebIndex, a multi-market global research company, shows that Facebook, Twitter and Google+ have seen growth rates of up to 44% between the second quarter of last year and the first quarter of this year.

While Facebook remains the largest social network site in the world, Twitter is currently the fastest-growing one.

More interesting, though, is that six out of the ten largest social media sites are Chinese.

Tens of thousands of websites and key words are blocked in China, according to GreatFire.org, which monitors online censorship in the country.

Facebook, Twitter and Google+, the most popular ones in the world, are blocked; businesses will therefore have to spread their message through local equivalents. 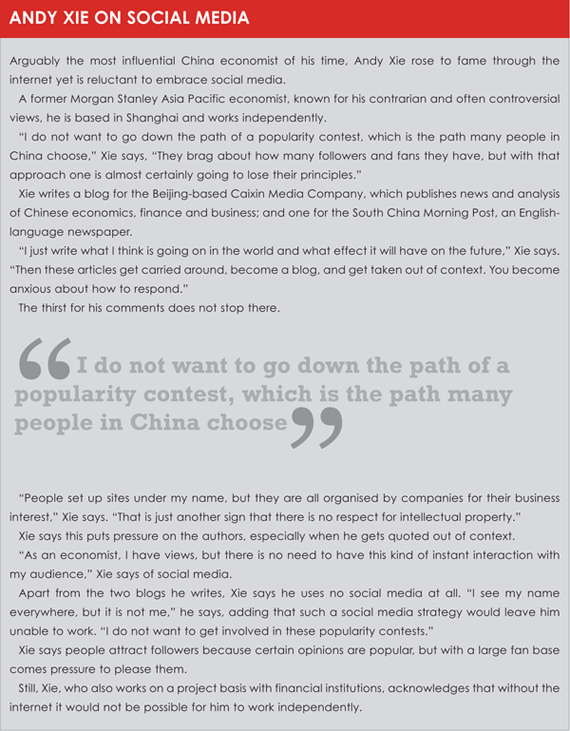 ‘HOLY CRAP’
Many foreign companies, however, are not aware of the fact that their slogans and global approach simply do not work in Chinese. Often, they also use sentiment analysis to find out whether positive or negative comments are being made about their brand.

Detecting sentiment is hard enough in English, says Ip. The phrase “holy crap”, for example, will confuse such software because “holy” tends to be used in a positive and “crap” in a negative context.

“This is difficult enough in English, and impossible in Chinese,” Ip says.

Sebastian Dovey, managing partner at Scorpio Partnership and author of the Future Wealth Report, says companies need to understand this “cannot be done on the cheap”.

Dovey says the fact that many social media sites are blocked in China is not the main problem for those targeting high-net-worth individuals, many of whom are able to travel abroad.

Instead, he criticises how websites are built. “Websites need more empathy and less of the stereotypical route: what we have, what we do, we perform,” he says.

In China, he adds, users want the “it is all about me” feeling. Luxury brands have been particularly successful.

Chinese users are also used to interacting, which means a company will have to monitor posts online and employ people to respond. Unlike luxury brands, financial institutions have had limited success with their online presence.

“The attitude is a bit like those of Swiss banks a decade ago, when they thought there was no need to find the wealthy because the wealthy would find them,” he says.

“There is this idea that one can get clients for free, but a badly implemented social media strategy makes companies look worse than none at all.”

Many foreign companies have failed to understand life behind The Great Firewall. Though Silverman notes that, judging from the comments some put on social media, “Chinese do not even consider the possibility that people outside China would read their posts”.