Asset managers with ambitions in India were desperate for change long before voters cast their ballots to elect reformist Narendra Modi of the Bharatiya Janata Party as their new prime minister. Stefanie Eschenbacher explores the changes.

Entangled in red tape, India has been a challenging market for asset managers. More than half of the asset managers in the country have posted losses, amid several high-profile exits in recent years.

Data from research firm Cerulli Associates shows only 18 of the 44 asset managers in India posted a net profit in the financial year of 2012, the latest for which data has been analysed.

There is only one foreign asset manager in the top ten, Franklin Templeton India.

Morgan Stanley sold its wealth management business in India to Standard Chartered last year, having only set it up in 2008. The year before that, Fidelity Worldwide Investments sold its mutual fund business, having made losses every year since it was set up in 2004.

Arvind Sethi, the chief executive officer of Tata Asset Management, says those that have not invested and built scale are finding it difficult – whether they be foreign or domestic.

Despite a population of 1.2 billion people, India is still a small market for asset managers. Total assets invested in funds amount to just $165 billion, comparable to those that are held by medium-sized asset managers in developed markets.

The two-decade old industry has, at least until recently, suffered a steady stream of redemptions. Most asset managers have failed to achieve scale. Distribution costs are high, but margins are low. Most assets are held in lower-margin fixed income funds.

Leo Puri, the chief executive officer of UTI Asset Management, says there were times when regulation was particularly harsh on the asset management industry. Today regulation is more favourable, but Puri says other challenges remain.

Those with ambitions in India need a genuine long-term horizon and perhaps to rethink their strategy if they want to succeed in a market where the GDP is forecast to rise from under $2 trillion today to about $5.5 trillion by 2025. Savings amount to $600 billion, but are forecast to grow as more investors look to save in financial assets.

CREATING WEALTH
“The challenge for our industry is to make investors more aware of mutual funds as a vehicle for creating wealth and meeting financial goals,” Sethi says. 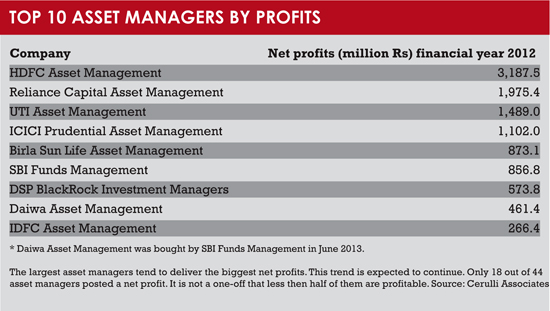 “Savers in India have been brought up on fixed deposits and insurance for the past decade – so getting them used to the idea of equity risk or mark-to-market risk in bond funds is the big challenge,” Sethi adds.

Thusitha de Silva, who covers Asia for Cerulli Associates, says asset managers expect further changes from Modi. “There is a lot of red tape in India, and asset managers hope that Modi will cut it,” he adds. The Association of Mutual Funds in India and the Securities and Exchange Board of India have already launched a series of reforms designed to address the troubled asset management industry.

Their main objective is to encourage the largest asset managers in India to expand coverage into more rural parts – nearly all assets are raised in the five largest cities.

COMPELLING
They will be the main drivers of efforts to grow the mutual fund investor base in India, and de Silva says there is scope for their profitability to improve after the costs of expanding their businesses are factored into their cost bases and amortised.

The Association of Mutual Funds in India and the Securities and Exchange Board of India recently launched the District Adoption Programme, which focuses on 188 districts across India where mutual fund coverage is low.

Asset managers are granted exclusive rights to distribute their funds there, and they can charge up to 30 basis points extra on the assets they raise.

“Each of these asset managers can reserve a district they want to pursue – they have a first-mover advantage and face no competitors,” de Silva says. “This makes a compelling opportunity for any asset manager.”

The programme is supported by interactive tools and mass media campaigns, which all centre on the target of promoting the concept of investments.

REMOTE AREAS
Bindal suggests that asset managers in India will also have to rethink their distribution models, and highlights the need for new distribution channels, such as online distribution, especially when trying to reach remote areas.

He adds: “We are already online, with tablet and mobile applications, and are active on social media in five local languages.” In many parts of India, investors can now also buy and sell mutual funds via SMS from a registered mobile number.

UTI Asset Management has adopted 12 districts and engages in a variety of government-backed programmes, including micro pension schemes, but Puri says a broad mutual fund-linked retirement scheme would really give the industry a boost.

Puri says the next natural step would be for regulators to allow insurers to award mandates to asset managers.

The Securities and Exchange Board of India has already loosened restrictions on what products asset managers can launch, but requires them to put up minimum seed capital. Sethi says the experience of asset managers varies when it comes to launching new products.

The regulation has not deterred UTI Asset Management to pursue new strategies. Puri and his team are preparing a real estate investment trust.

RATIONALISATION
Bindal adds that Franklin Templeton India has not hesitated to wind down products, but that it has recently received approval for a multi-asset allocation product that can switch between equities, fixed income, money market funds and gold. 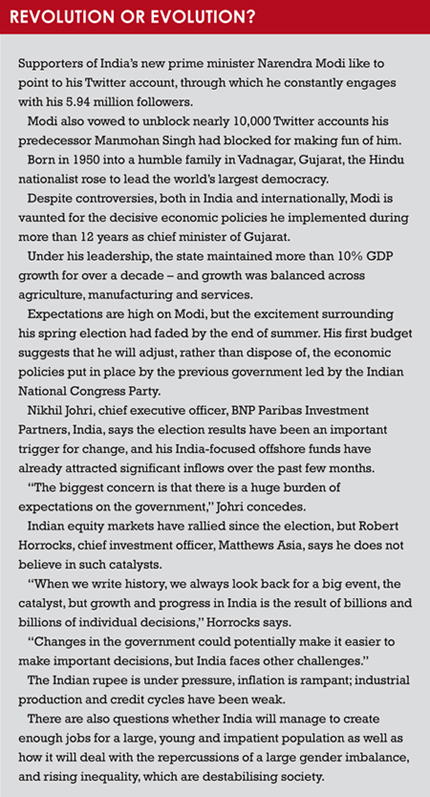 “We have looked at our range and rationalised it, but this is something we wanted to promote. Certain distributors and end-clients appreciate if we offer them an asset allocation solution rather than more products.”

Nikhil Johri*, the chief executive officer of BNP Paribas Investment Partners India, says he has plans to double the size of assets under management in India in the next 12 to 18 months.

Over the past two years, his focus has been on building a track record for funds – a critical factor he says will lead to an increased traction among distributors and clients. “We believe this, coupled with the positive market outlook and sentiment, will help us significantly build assets in our local funds,” Johri says. “We will also look to launch new products if we believe that these will help our clients make the most of the opportunities arising in the markets.”

PRODUCT LAUNCHES
Johri says previous restrictions put in place by local regulators in terms of product launches have not been a constraint to the development of the asset management industry in India.  “There used to be a lot of similar products, and asset managers often launched the same product under a different name,” he says. “The market is not big enough for 1,000 different funds – it confuses retail investors.”

More differentiation within the product range is desirable for asset managers, but the main objective of regulators is to educate investors – and that is not possible with complex products.

NEW IDEAS
Many funds also used to be sub-scale, but the regulator does now demand a minimum size of 100,000 Indian rupees ($1,660) for equity funds, and 200 million Indian rupees for any fixed income funds. The concern is that asset managers often do not adequately cater for sub-scale products, which are already more expensive for investors because costs are spread among a few.

BNP Paribas Investment Partners India, has not adopted any districts, but regularly conducts investor awareness programmes. It recently launched a constant maturity fixed income fund, which Johri says was approved without issues. He adds: “There are no problems pursuing new ideas, only with replicating something old and labeling it new.”