CHINESE CURRENCY: The awakening of the ‘red back’

The offshore âdim sumâ bond market has become the latest star in the China investment story, but it is underpinned by the growth opportunity presented by the Chinese currency. Nick Fitzpatrick reports.

Investors who are asking themselves whether to invest in China’s currency – the renminbi – have an easier decision to make than Beijing does about investing in the euro. China’s leaders are reticent about Brussels’ recent invitation for China, one of the fastest growing economies in the world, to buy bonds from the European rescue fund, the European Financial Stability Facility, which is designed to help some of the slowest growing economies in the eurozone, such as Greece.

“The fund has not established details of its investment options so we still can’t talk about the issue of investing,” Zhu Guangyao, China’s deputy finance minister, told the media recently.

Perhaps Brussels would find the minister more receptive if these “investment options” included a renminbi tranche in a bond issue. This is because China is attempting to internationalise its currency, which has the potential to rival the dollar in international trade and settlement, and become an alternative reserve currency.

A number of fund managers have launched products recently to capitalise on the mounting interest around this, while HSBC has attempted to steal a lead among financial services providers by bringing a broader offering of renminbi products, such as foreign exchange, to market.

“Increasingly, corporates and pension plans will have to increase their exposure to the renminbi as it internationalises,” says Massimo Guiati, chief investment officer at An Zhong (AZ) HK, a Hong Kong-based investment management operation sprouting from a joint venture between Italy’s Azimut and China’s CMT Holdings. 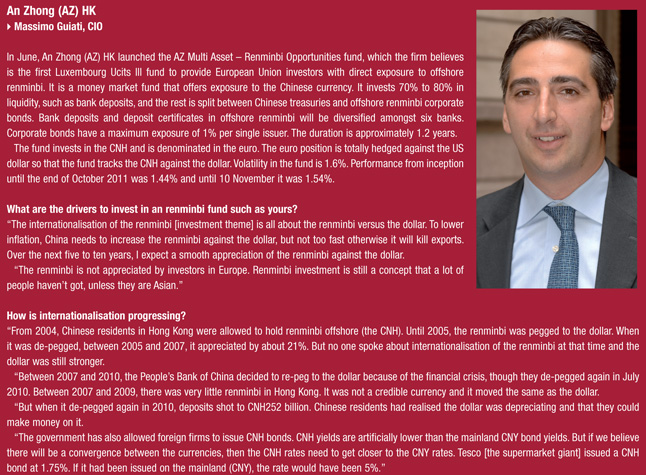 Certainly, more foreign corporates will want renminbi investment services if they choose to transact more of their business in renminbi. Renminbi settlement was introduced in June 2010, giving foreign firms the option to pay Chinese exporters in renminbi rather than dollars. It is a key development in China’s gradual externalisation of its currency – a process that also includes authorising offshore renminbi bank accounts and the launch of a renminbi bond market in Hong Kong.

According to Chinese authorities, by the end of the second quarter of this year 10.2% of China’s foreign trade was transacted in the Chinese currency, up from 7% in the first quarter. HSBC says that if the current trend continues, at least half of China’s trade flows with emerging market countries could be settled in renminbi within three to five years, from less than 3% currently. Emerging markets account for just over 50% of China’s foreign trade, so this means that nearly $2 trillion (€1.5 trillion) worth of trade flows could be settled in renminbi annually, making it one of the top three global trading currencies.

The impulse behind the renminbi investment case stems from internationalisation measures like this. But more recently, another dynamic may have entered the game. China watchers could have seen a significant change in how it manages its economy.

The country has a problem with inflation and Guiati says that to lower it, it needs to increase the strength of the renminbi against the dollar, without killing exports.

Bashing inflation with currencies rather than interest rates is a particular option for countries that export more than they import, because allowing the currency to rise makes goods and services more expensive on the world market. The upshot of this is to slow growth without the need to put up rates. 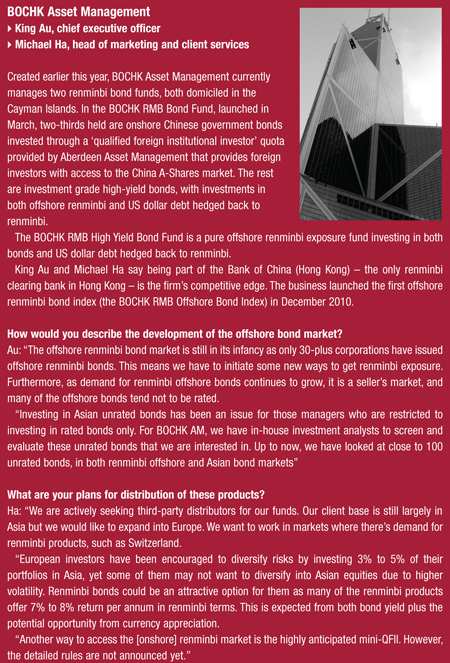 Anthony Gillham, portfolio manager at Skandia Investment Group, spotted this possible change of policy in the summer when Chinese authorities allowed their currency to appreciate at a faster pace against the US dollar – nearly 1% – in the first two weeks of August.

“With the outlook for global growth under pressure, it is possible Chinese policymakers are asking whether they want to raise interest rates further to contain inflation. Instead, why not allow the currency to do the hard work?” he said at the time.

The growth potential of the renminbi against the US dollar was seen more dramatically when the Chinese currency was de-pegged against the greenback between 2005 and 2007. Guiati says it appreciated by about 21%.

In 2004, prior to de-pegging, Chinese residents in Hong Kong were given permission to hold renminbi bank accounts. With little take-up the 21% appreciation seemed to pass people by and eventually, in 2007, the renminbi was re-pegged to the dollar.

But when in 2010 the currency de-pegged again, offshore deposits of renminbi in Hong Kong shot to CNH252 billion (€29 billion). “Chinese residents had realised the dollar was depreciating and that they could make money on it,” says Guiati.

CNH is the ticker for offshore renminbi to differentiate it from renminbi on the Chinese mainland, which is denoted as CNY and has a different exchange rate.

The situation today is that the CNH can be moved 50 basis points up or down against the dollar. But CNH deposits are moving only in one direction – upwards, and exponentially at that.

Research by Allianz RCM, part of Germany’s Allianz Global Investors, found that renminbi bank deposits in Hong Kong now hold around CNH600 billion and represent approximately 10% of the total Hong Kong deposit base. The firm, which itself has entered the renminbi investment market recently with a bond fund, says it expects this to reach around CNH2 trillion in 18 months’ time.

After the craze for Chinese equities in recent years, investors are now encouraged to look at the currency as an investment. But how can investors attack it?

At present, much attention is given to the nascent offshore CNH bond market in Hong Kong. In keeping with the culinary theme that runs through this market – the bonds are referred to as dim sum bonds, after the Chinese dish – in September 2010, fast food giant McDonald’s became the first multinational to issue a renminbi bond.

One asset management firm watching the renminbi with interest is HFT Investment Management (HK), the Hong Kong arm of France’s BNP Paribas Investment Partners’ joint venture with Haitong Securities in Shangahi. Chi Lo, its chief executive officer,  expects the renminbi to appreciate in the next two years – but he says China’s current account surplus is important to the outlook. “The current account surplus is a fundamental force. It is 5% of GDP and as long as we have the surplus, it means more demand than supply of the renminbi.”

However, keeping a current account surplus may become more difficult as China grows, he says. “Growth will increase imports, and weak external demand in the post-subprime years will slow Chinese export growth. When the current account becomes a deficit, the renminbi will depreciate.”

Despite this eventual challenge to the currency’s ongoing appreciation, a strength of the currency so far is its relatively low volatility.

King Au, chief executive officer at BOCHK Asset Management, a recently launched fund management business owned by the Bank of China (HK), says: “Many investors want long-term sustainable growth. Emerging markets is a theme for growth, but investors also want stability. Renminbi exposure is an attractive option because its volatility has been lower than that of other major currencies and is expected to remain so under an exchange-controlled environment.”

As more measures are taken to allow the renminbi to circulate freely across international borders, the CNH and the CNY will converge and the renminbi will eventually be fully convertible. At that point, the renminbi’s presence in the world may one day catch up to China’s political and economic presence. In fact, it is notable that China’s position as the world’s second largest economy is not reflected by the status of its currency. But that’s the germ of the renminbi story.

“China is the biggest holder of US Treasuries and has the third-largest foreign reserves in the world. But what it is missing is a freely convertible currency,” says Guiati.

“Worldwide reserves of the US dollar amount to 61% of foreign reserves, and the euro is 24%. The renminbi is still zero, but this cannot always be the case.”