AGRICULTURE: The best and worst of times

The abundance of certain crops in Brazil means there is nowhere to put it all. Andrew Short considers the investment opportunity in storage.

The potential for Brazil to become an agricultural superpower has long had analysts salivating at the prospect it will surpass the US in soybean production and exports. It may be this year, 2013, those predictions come true.

Brazil’s government crop supply agency, Conab, also raised its forecast for the country’s record 2012/13 corn and soybean crops in July, citing problem-free harvesting as the reason for the bumper year. Corn exports have more than doubled compared with 2012, and soybean exports are expected to be 6mmt higher than last year, says Conab.

However, even with the figures coming out in Brazil’s favour, the US still has the upper hand, and for the Latin American country there are two problems it must face: logistics and storage. These will hamper Brazil’s rise to becoming a global agribusiness superpower – they may even be starting to turn Brazil’s export boom into a nightmare.

DELAYED HARVEST
It is not uncommon for 15-mile lines of trucks to be seen waiting to unload soybeans. Corn exports, normally completed in December, were still moving through the port system in late March. Meanwhile, a delayed soybean harvest is likely to compete with Brazil’s second mid-season corn harvest for space, further complicating the export scene. Eight out of 10 soybean shipments to China’s Shandong Chenxi Group failed over a two-month period, prompting Chenxi to consider redirecting orders to Argentina and cancelling some 2mmt in purchases from Brazil.

Clarivi consulting Brazil director Leonardo Sologuren says the reason for the bottlenecks at the ports is that the logistics and storage haven’t kept pace with production. “It seems Brazil can’t cope with the growth in grain production.” 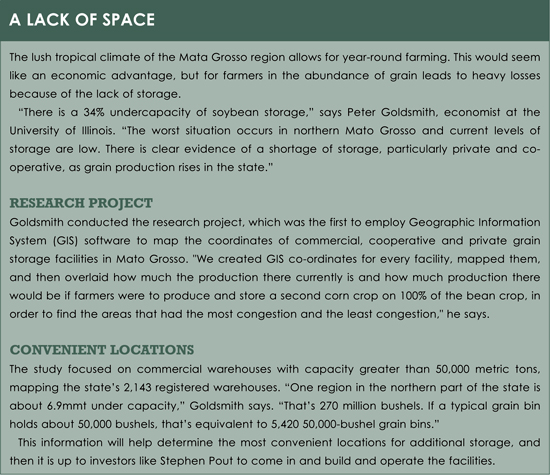 There is also a new law that limits the number of hours a trucker can drive each day and this is reducing the flow of commodities from interior growing regions to export terminals. The effect of this  will be felt by grain traders and their forward pricing arrangements, according to Rabobank Brazil analyst Renato Rasmussen.

“Growers for the current harvest are likely to have underestimated the possibility of such a sharp increase in freight costs,” he says. “This chaotic logistics scenario is threatening Brazil’s ability to export the record-setting corn crop,” he says.

The Brazilian government is aware of these logistical problems, and has been targeting roads, railroads and new port developments with fresh investment over the past year.

There has also been plenty of foreign capital looking to invest in these areas. However, there are other niches in the supply chain that need to be filled and are not fraught with the problems the above projects can face. For example, a 1,000-mile road from Cuiabá to Santarem, promised since the 1970s, still has 600 miles of dirt surface that can take 30 days to drive. Even with government promises and continued investment it seems certain projects will never become a reality.

INSUFFICIENT STORAGE
For the overlooked investment ideas it is worth going back to the ports. The truck queues leading to them are because of overloading storage. The logistical problems reach back to the farm, where storage is not sufficient to allow farmers to stock until the post-harvest craziness subsides.

The overlooked area becoming appealing amid this logistical nightmare is warehousing. There is a lack of these facilities in many of the areas that produce corn and soybeans.

SIMPLY WAREHOUSING
Stephen Pout, director at AgriBusiness Investimentos, says that most of the logistics chain is missing in Brazil and there is a host of problems that make it unappealing to long-term investors such as pension funds.

“I could go and buy rail cars or trucks and lease them to Vale, but this is a costly operation because of maintenance and asset depreciation. It’s not something a German or a Dutch pension fund is going to be interested in doing,” he says.

Pout adds that with investments into ports there is a lot of political interference and this causes problems for foreign investors.

“Warehousing is very simple. We go to certain parts of Brazil where production is higher than storage capacity and we build warehouses,” says Pout. “We intend to operate these warehouses as a grain handler but not as a trading company, this is because most private equity and pension funds won’t be able to get their heads around trading.”

The growing importance of storage was backed up by the announcement on July 11 that the Brazilian Development Bank (BNDES) will use 1 billion Brazilian reales ($440 million) to finance the construction and expansion of silos and storage facilities for grain producers.

Pout believes this is a good start but there is still a long way to go to fill the void.

“It appears today, we are seeing the big money being made by those who own the supply chain assets, and this is where we think investors should be betting on Brazil,” he says.