BOOK EXCERPT: Reflections of a custodian

A new book charts Asia’s financial development from the custodian’s perspective. Its author, Lawrence Au, shares an excerpt relating to each of the past three decades. BICYCLE COURIERS IN JAPAN, 1980s
A key challenge for securities investment firms in Tokyo was how to deliver physical securities to counter-parties on settlement date within the deadline. Bicycle couriers were typically employed to deliver these securities in central Tokyo to beat traffic congestion. Clad in bright racing jerseys,
they flew through the central business districts, carrying documents entrusted to them for safe and speedy delivery. 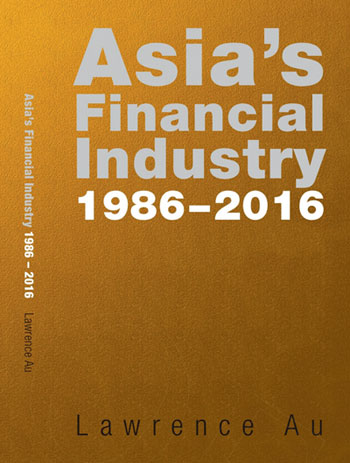 Bicycle couriers originated around 1970 in New York City and quickly became an icon of the city. They made their first appearance in Tokyo in the 1980s making deliveries in Marunouchi, Otemachi, Chiyoda, Ginza, Akasaka – the financial and business districts around the Imperial Palace area. Traffic in Tokyo was notoriously jam-packed in the 1980s, but bicycle couriers could use the sidewalk or go up one-way streets, and they could choose the quickest route by nimbly avoiding traffic lights, making them the most effective means for delivery around central Tokyo. Sailing past motor vehicles on crowded streets, bicycle couriers were admired by young people who saw the trade as a way to look good, feel good and stay in shape. Consequently, the messengers on the bikes were seen as cool. Some of the messengers were die-hard cycling fans who took their jobs as an extension of their hobby; they wore outfits with eye-catching helmets, sunglasses, and messenger bags, and their unique fashions were featured in magazines. KOREA’S GOLD DONATIONS, 1990s
An estimated 1.7 million Koreans lost their jobs in the readjustment of the labour markets [following the 1997 Asian financial crisis]. Those who retained their jobs worked twice the hours to produce more. They spent less and saved more. Government employees agreed to give a tenth of their salary to create a fund to provide for those who had lost their jobs. This sense of shared burden was epitomised by the gold jewellery donations. Starting in January 1998, the government asked the country’s citizens to donate their gold jewellery to help repay the loan [of $58 billion owed to the IMF] more quickly. Millions answered the call and went to special collection points to give the government what they could in heirlooms, wedding rings or small gold figures, such as those traditionally presented in Korea on a child’s first birthday. Athletes brought in gold medals and trophies. “To think of all the gold and the memories that we had to give away,” said Choi Gwang-Ja, who like many other South Korean women gave away her gold jewellery to help dig the national economy out of the financial crisis. “It’s really heartbreaking. And it makes me fill with tears even now, because each piece of jewellery had a story – it was my wedding ring, my husband’s wedding ring, the ring given to me when my daughter was born. But at the time, it was the only thing we could do. People were saying that the whole country was going bankrupt.” Korea’s gold collection drive was featured in many foreign media outlets. The result was impressive. According to a report in Hankyoreh newspaper, 227 tonnes of gold were collected, equivalent to a quarter ounce for every adult in South Korea, valued at more than $3 billion. A FIRST IN CHINA, 2000s
In the run-up to the launch [of the Huaan Chuangxin Fund], days and nights were spent on working out the details of operational flows and procedures and in testing the system, but there was one critical issue to resolve: how to manage the sales process and fund subscriptions? At this nascent stage of China’s stock-market development, many people were naively attracted by the prospect of the rise of stock prices and saw securities investment as an opportunity to get rich quickly. Initial public offerings (IPOs) attracted hundreds of thousands of people lining up at bank branches for subscription and minor riots erupted due to crowd misbehaviour.  The biggest concern was not that the Huaan fund would not sell, but that it would be at least several times oversubscribed given the buoyant investor sentiment in the domestic stock market, and thus would attract billions of renminbi of investment capital. It was critical to look at ways to cope with the expected overwhelming demand, in order to ensure the offering would be orderly and the potential impact on social stability would not be undermined. Several options, including a lottery draw, were discussed to establish the best and fairest allocation method for the expected over-subscription. After much deliberation between all the parties in consultation with the China Securities Regulatory Commission, it was decided that the fund would be sold directly but only through 139 of Bank of Communications outlets in 13 major cities instead of throughout the country like previous stock IPOs. The threshold for individual investors to bid for the new open-ended fund was set at 10,000 renminbi with a maximum limit of 300,000 renminbi. Redemption within the first three months was not allowed. On September 11, 2001, hours before the World Trade Centre terrorist attack, the fund was launched. Domestic investors flocked to subscribe to China’s first-ever offering of an open-ended mutual fund. In the first two hours, investors snapped up half of the 3 billion renminbi open-ended mutual funds allotted for retail investors. “Each outlet received an average of more than 10 million renminbi in subscriptions within two hours this morning,” reported South China Morning Post quoting a source close to Huaan Fund Management. China News Agency reported that a 70-year-old Beijing retiree, who had never invested in the stock market, travelled all the way to Fuzhou and lined up for 17 hours before he successfully bought subscription of the fund. By noon, more than 90% of the retail allocation had been subscribed. There was no major commotion or incident reported at any of the sales outlets. The first open-ended fund in China was born.  Lawrence Au is the former regional head of BNP Paribas Securities Services in Asia-Pacific. Asia’s Financial Industry 1986-2016: A Custodian’s Perspective is published by YouCaxton Publications, UK, available in paperback (246 pages) or Kindle (216 pages) from Amazon (US, UK, Canada, France, Germany, Australia, Japan, and India online stores), Barnes & Noble in US, Waterstones in UK, Kinokuniya in Singapore and Swindon in Hong Kong. ©2016 funds global asia