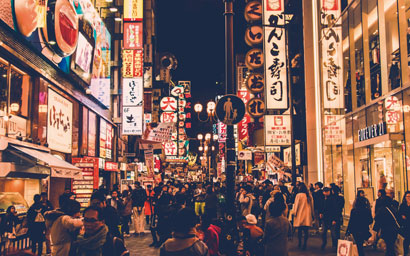 From elegant street wear to intricate electronics, Japanese products are popular and fashionable. These retailers are contributing to an economic resurgence, says Richard Kaye of Comgest. In 2010, tourist arrivals in Japan were a record 8.6 million. By 2016, that figure had risen to 24 million. Hotels are increasingly hard to book and the government just deregulated the Airbnb industry to try to accommodate the rising tide of tourists. What draws these millions of people? In two words, ‘Cool Japan’. Not unlike ‘Cool Britannia’ in the heyday of British prime minister Tony Blair, Japan is rediscovering its self-confidence and the outside world is taking notice and joining in. Whether it is in the global acclaim garnered by Marie Kondo’s home-organising books, or the evocation of his birthplace in the writings of Nobel Prize-winner Kazuo Ishiguro, Japan is seizing the world’s imagination. Of course, culture, history, cuisine, architecture and nature are all part of that – but Cool Japan has a vivid economic dimension, too. The result, we believe, is a land of opportunity for stock-pickers focused on long-term growth prospects. Chic shopping
Here in Japan, tourists buy their portion of Cool Japan to take home with them and this ‘inbound’ consumption has become a significant earnings swing for many Japanese retailers. In Asia, at least, Japan has become associated with lifestyle products. Purveyors of Japanese fashion like Uniqlo, Japanese cosmetic technology like Pola Orbis, Japanese maternity products like Pigeon or innovative retail experiences like Don Quijote have found eager consumers. What’s more, some of these companies are now going directly to overseas markets and establishing their presence throughout Asia. Japan has long been a byword for great technology and world-class precision manufacturing. Japanese companies like Murata make most of the iPhone’s insides. Japanese optical components from Hamamatsu Photonics diagnose us in every CT and PET scan as well as most dental X-rays conducted anywhere in the world. Japanese robots like Fanuc’s are powering automation throughout Asia. Automotive component company Nidec is behind major evolutions in engine technology and the hybrid vehicle. Now, the new wave of Japanese ingenuity is in the consumer domain, with Asia as its global launch pad. Just as Japan might not yet be recognised globally as a lifestyle innovator, not many people may realise the importance of Japan’s Silicon Valley. Although not widely known on the global stage, Japan’s internet titans have transformed the domestic economy as much as their American counterparts, albeit in a different way. Japan was slower than other developed countries to ‘log on’. E-commerce, online advertising and online payment all took off more gradually. But local ‘Amazons’ have emerged and they are now driving those transformations with astonishing speed. Among these are Start Today, an online fashion brand incubator that has achieved cult status, especially among young users, and GMO Payment Gateway, Japan’s largest independent online settlement provider. GMO counts Start Today as a major partner and is at the forefront of payment solutions in Japan alongside Apple Pay and Bitcoin. Other examples include Monotaro, which provides timely, affordable hardware and tool supply services through an online catalogue, circumventing a tangle of traditional distributors and wholesalers. There is also Daifuku, which provides logistics solutions to the burgeoning warehouse and distribution needs of Japan’s e-commerce market. Behind much of Japan’s Silicon Valley stands Softbank as partner or stakeholder, most prominently as the incubator of Yahoo Japan. Softbank is now looking to take expertise gathered in Japan’s Silicon Valley to the world stage through its Alibaba stake and its much talked-about $100 billion Vision Fund. Superb science
Cool Japan also has a ground-breaking biotech industry, which springs from Nobel Prize-winning technology, the needs of an ageing society and, crucially, an accommodating and nimble regulatory environment. In this space are companies such as PeptiDream, a cutting-edge biopharmaceutical multinational, which has a global base of ‘big pharma’ clients but has found Japan its most suitable location to set up shop from the perspective of talent-gathering and government incentives. Another example is Sanbio, which provides revolutionary therapy for stroke victims. Although conceived in Stanford University labs, Sanbio’s operation was set up in Japan, again for access to talent and an obliging regulatory framework. The city of Tokyo is Cool Japan’s poster child. Created 500 years ago as one of the world’s first artificial cities on landfill in marshland around a fishing village, Tokyo is, by itself, one of the largest economies in Asia. Its population is growing as internal migration swells its workforce. It is radically redesigning infrastructure and architecture ahead of the 2020 Olympics – and it is in the throes of a real estate boom. Tokyo has the most Michelin five-star eateries in the world and is rated as one of the world’s most liveable, accessible, clean and safe cities. The election last year of the charismatic Yuriko Koike as Tokyo governor seemed to symbolise the rejuvenation of this city after two decades of ambiguity following the Bubble Economy. The energy is manifested everywhere. Makita, a power tools manufacturer, has had consistent growth in its Japan business for seven years thanks partly to the rebuilding boom going on in Tokyo. The growth of Persol, one of Japan’s largest placement companies, is a reflection of the multi-decade-high jobs-and-applicants ratio centred on Tokyo. Obic, Japan’s Oracle, similarly benefits from the extreme shortage of software engineers, with seven times more jobs available than people to fill them. Turning point
The years 1868 and 1945 were pivotal in Japan’s history. The years 2011 and 2012, which brought the trauma of the earthquake and the Fukushima disaster, and the election of a government determined to turn a new page in Japan’s history, might in retrospect be perceived in the same way, not least because that is when the rest of the world started to discover Cool Japan. Richard Kaye is the portfolio manager of the Comgest Growth Japan fund ©2017 funds global asia