SGG EVENT: A wealth of options 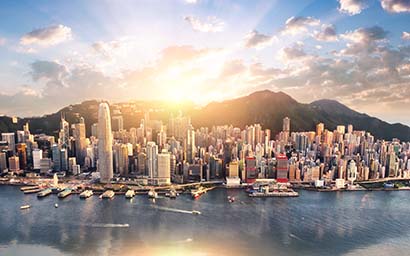 Funds Global Asia was media partner to an event held in Hong Kong by investor services firm SGG Group to discuss investor options in Asia. SGG Group held its latest thought leadership event on May 31 at the Conrad Hotel, Hong Kong, to discuss the topic, ‘Inbound capital and investment flows into Asia: Do investors have more options than ever before?’ Introducing the event, SGG’s group fund solutions leader, Justin Partington, explained to the 60 attendees that the firm aimed to examine the major issues facing fund companies around the world in a series of seminars. As well as Hong Kong, these are taking place in New York, London and Singapore. Partington also discussed his firm’s recent acquisition of First Names Group, a provider of trust, fund, real estate and corporate services. The merger gives SGG added presence in Asia, where it now employs 130 staff. Development
The discussion, chaired by Alan Chalmers, publisher of Funds Global Asia, involved Christine Lin, partner at EY; Jiffriy Chandra, chief investment officer of TransAsia Capital; Nicholas Plowman, partner at Ogier; and Udit Gambhir, head of Asia at SGG. Their initial conversation highlighted key development themes in Asian markets such as China, India and the countries of the Association of Southeast Asian Nations (ASEAN). The debate examined the effect of possible sanctions from the US on China but noted that the region had matured over the past ten years and that current possible sanctions levels would not significantly impact the regional economy. China was no longer a pure export economy, said the panellists, but had a strong domestic market, populated by many global brands, and could rely on the economic boost provided by the Belt and Road infrastructure development plan devised in Beijing. Our experts then looked at various initiatives in the region, including fund passporting within Asia. The mutual recognition of funds (MRF) scheme between mainland China and Hong Kong had seen some progress, though growth remains slow. It has now been extended to Switzerland and France but the main traffic north and southbound between Hong Kong and the mainland has benefited from more fund approvals. That said, a 50% cap that requires asset levels to be balanced between the north and southbound sides may need to be reviewed. On the other passporting initiatives there was no tangible progress at this time, but a strong will to succeed in the long term. Promising
Turning to Singapore, panellists lauded the Singapore Variable Capital Company (S-Vacc), a new fund structure, as a promising development, although the value of its implementation was still to be seen. A similar scheme for Hong Kong was being considered and was felt to be much-needed, but whether it should be purely retail or extended to private funds prompted considerable debate. The panel’s best guess was that the proposed Hong Kong scheme would remain largely retail-focused given the pressures faced by Hong Kong and Singapore as members of APEC [Asia-Pacific Economic Cooperation] and the corresponding obligations imposed on them from an international tax perspective. The debate finished with a look at current fund structures such as local Hong Kong funds, Singapore funds, alternative investment funds and Cayman Islands funds. The strong consensus was that the Cayman Islands still had a strong hold on the alternatives and private fund sectors. Views from the panel CHRISTINE LIN, PARTNER, EY
“Credit funds are one of the new trends but markets are also focused on themes such as education, pharmaceuticals and healthcare in China.” “Tech will also be a leading player in the coming years; however, through the Belt and Road policy, we are seeing a lot of private equity with much larger fund launches.” “We are waiting for the approval on the Hong Kong open-ended fund company structure by the Legislative Council, although tax remains one issue to be clarified.” JIFFRIY CHANDRA, CHIEF INVESTMENT OFFICER, TRANSASIA CAPITAL
“Asia is very much trading within itself, be it developed Asia or emerging Asia. It is also trading with other emerging markets such as Latin America, Eastern Europe and Africa.” “As part of the Belt and Road policy, we are providing trade finance to small and medium-sized companies, which represent an underserved part of the market.” “The open-ended fund structure has been long overdue for Hong Kong managers. The tax authorities need to sort out the tax implications. I’d like to see it apply to private capital not just public market retail-oriented funds.” NICHOLAS PLOWMAN, PARTNER, OGIER
“There is a huge demand for international education providers in China. Indeed, we have done three education funds in China in the last six months that have a international focus.” “The Singapore Variable Capital Company (S-Vacc) has a place in the funds world but you need to be based in Singapore and initially it is likely to be more of a retail vehicle. The Hong Kong open-ended fund structure is also likely to be aimed primarily at the retail space rather than the private capital space.” “Cayman remains the dominant funds domicile in Asia at present but there are challenges ahead for all the offshore jurisdictions, such as beneficial ownership. However, Cayman is still and will continue to be very widely used by managers in the private funds space.” UDIT GAMBHIR, HEAD OF ASIA, SGG
“We are seeing a lot of interest in crypto but it is not easy. The biggest area of interest is private equity.” “In the last two years the interest in India has been quite substantial and it will continue to be important. Vietnam is one of the other hotspots in Asia. In Malaysia, we hope to see more capital flowing back following the elections.” “For the Singapore S-Vacc, the manager needs to be registered or licensed in Singapore. If the authorities want to encourage Hong Kong companies then maybe the Monetary Authority of Singapore need to make Hong Kong an equivalent jurisdiction.” ©2018 funds global asia