INSIDE VIEW: A bright future for Japan 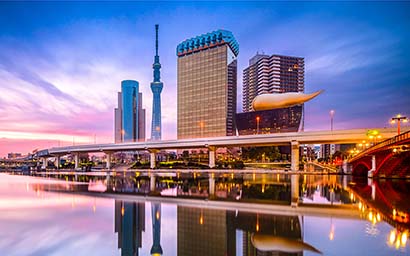 Under strong leadership, Japan is enjoying its longest period of growth since the 1980s. Katsunori Ogawa, portfolio manager at Sumi Trust, says there is more to come. The Japanese economy is expected to continue on its path to moderate growth in 2018 on the back of global economic growth, a rise in exports and firm domestic demand. The last quarter of 2017 marked the eighth consecutive quarter of growth, the longest period recorded since the late-1980s bubble. Figures from the real GDP (preliminary report) for October–December 2017 revealed that growth was +0.1% year on year (+0.5% annualised). Although this was a decline on the previous quarter when growth reached 1.3% and was largely attributable to lower net exports and inventory investments, our view of the economy growth remains unchanged. Personal consumption, which had dipped in the third quarter of 2017, mainly due to poor weather, recovered in the last three months of 2017 and exports accelerated on strong IT demand. Capital expenditure also saw its fifth consecutive quarterly increase, reflecting corporate investment appetite and recovering overseas demand. But the rate of GDP growth slowed as strong imports offset contributions from exports, and because inventory investment had weakened. Growth remained firm nonetheless. As for external demand, exports grew 2.4% quarter on quarter on strong demand for IT products (including electronic parts and semiconductor equipment) and industrial robots used at manufacturing facilities. However, a rise in the import of mineral fuels and electrical equipment offset strong exports, and as a result, the export contribution to real GDP growth was negligible. Looking ahead, we believe exports will benefit from strong demand for semiconductors and semiconductor equipment from data centres and the auto industry. On capital expenditure, we see continued growth with the progress of the 2020 Tokyo Olympics and urban redevelopment projects, and investments in efficiency and labour-saving technology to offset the serious labour shortage. In addition, personal consumption should be uplifted by higher incomes supported by a tightened labour market. However, the rise in prices of daily necessities such as food and petrol may bring back a climate of thriftiness which could prove to be a risk factor amidst the growth. Other risk factors to consider would be prolonged volatile financial markets, which could raise uncertainty and create a negative wealth effect, in turn having an impact on personal consumption and capital expenditures, as well as a stronger yen which could impact corporate earnings. On the geopolitical front, North Korea remains a risk not to be forgotten.

Monetary policy
We are still far away from reaching the Bank of Japan’s (BoJ) stated inflation target of 2%. However, prices continue to rise, albeit gradually, and the domestic economy is recovering – just not strong enough to accelerate inflation. In this environment, the BoJ will neither loosen nor tighten its monetary policy. With Governor Kuroda remaining in office for another five-year term, we see little risk of the Japanese central bank changing its policy stance at this stage. However, we expect the end of negative interest rates some time in 2018. It has been two years this February (2018) since the introduction of negative interest rates in Japan. During this time the BoJ acknowledges that “a degree of progress was made, but that the policy effects are fading”. It is hard to imagine further positive effects from negative rates are yet to come after two years, and prolonging these may have adverse consequences on financial institutions and pension financing. Surely, the BoJ must be thinking of ways to end its negative interest rate policy without gaining an impression that it will start tapering, which would raise the value of the yen. Since the Lower House election victory in October 2017, prime minister Abe’s political power base has been rock solid and the economy has been growing steadily. But the scheduled consumption tax hike planned for October 2019 may impact the economy and Abe may announce a stimulus plan before this hike takes place. Japanese companies, especially those that rely on domestic demand, are already suffering from the shortage of labour and higher wages and it is believed that a potential stimulus would counter these issues. For example, this could include measures to boost IT investments to accelerate efficiencies in the automation of production and logistics facilities. Considering what is happening on the other side of the Pacific, the newly appointed Fed governor Jerome Powell is expected to follow in the footsteps of his predecessor and conduct three rate hikes this year, in an attempt to normalise monetary policy. As such, we expect to see normalisation in both the US and Europe, and a diverging Japanese monetary policy which will remain accommodative (though negative rates will end), which should keep the yen weak. We forecast the USD-JPY rate to reach 114-116 with EUR-JPY at 136-141 in December 2018.

Reform drive
On both a domestic and international level, sentiment towards Japanese equities in 2018 remains positive, with expectations that there will be continued global capital investment this year. Japanese share prices should continue to gain in 2018 on the back of global economic growth, strong Japanese corporate earnings supported by global demand, a stable political climate, further structural reform and an accommodating BoJ monetary policy. The TOPIX index is estimated to reach between 1,800-2,000 and the Nikkei 225 23,000-25,500 at year-end 2018. Furthermore, Japanese corporate operating earnings are projected to rise by 9%, which is lower than the 2017 growth rate of 16% but nonetheless higher earnings. This is based on a USD-JPY assumption of 110 and EUR-JPY of 130, but even with the USD-JPY at 105, we believe 6% earnings growth is achievable. Backed by a strong global economy, 2018 should continue to see increased demand for factory automation, machine tools, semiconductors and other external demand-related technologies. Under the Abe government’s work-style reform, companies involved in eradicating labour shortage issues, creating business efficiencies, and those involved in temporary labour staffing and the leisure industry should also benefit. But we are also expecting to see a bipolarisation of such companies depending on their product competitiveness, ability to control costs and business strategies. Thus, we cannot overemphasise the importance of stock selection. Global markets fell sharply in February 2018 as US long-term yields rose after US employment numbers announced in early February showed rising wages. This ignited fears of higher inflation and Fed tightening. Higher US yields meant a divergence from the low interest rate/low volatility Goldilocks economy, and shook investors who held risk assets who were forced to reduce these, leading to a sharp fall in share prices. This fall was a market phenomenon, and was not based on fears of a slowing economy or lower earnings (this would have seen a smaller impact on defensive sectors such as utilities and consumption-related stocks). Although the downside for Japan was limited, it has not been long enough since the sharp correction and trading volumes have yet to recover. The market still needs some time to recover, but the overall outlook for 2018 remains positive. ©2018 funds global asia

What does the year have in store for emerging markets?

As the US-China trade war ramps up with a hike in levies, Tai Hui, chief market strategist for Asia-Pacific at JP Morgan Asset Management, tells Romil Patel where he identifies investment value.