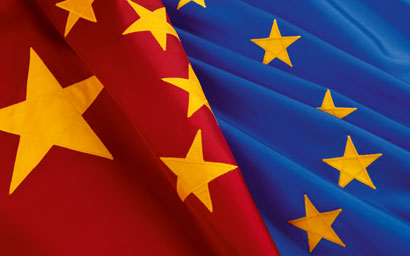 China Post Global's acquisition of a European ETF platform signals growing interest in passive investment in the Asian funds world. George Mitton reports. Exchange-traded funds (ETFs) are not yet big business in Asia, but that is changing. In the first quarter of the year, a net $7 billion flowed into these and other exchange-traded products in the Asia-Pacific region excluding Japan. That brings total assets in these vehicles in this region to $121 billion, almost the same level as in Japan’s more developed ETF market, according to the data from ETFGI, a consultancy. In the overall Asia-Pacific region, including Japan, the market for these kinds of funds – passive, transparent, index-tracking vehicles with low fees – is about a tenth the size of the corresponding market in the US. A number of international companies are making moves into the Asian ETF sector. Amundi, the largest Europe-headquartered asset manager by assets, launched its first Asian-listed ETF in Hong Kong in April. Bank of Montreal Global Asset Management added four funds to its range of Hong Kong-domiciled ETFs in February. But the deal that raised the most eyebrows was the acquisition, by Hong Kong-based firm China Post Global, of a set of ten Frankfurt and Zurich-listed ETFs formerly owned by the Royal Bank of Scotland (see box, page 13). The deal suggested that, not content with booming growth in assets within their borders, Chinese asset managers want to expand through acquisitions in Europe and elsewhere – and they like the look of ETFs. Is the China Post deal part of a trend? GOING POSTAL
Although the newly acquired ETFs, which bear the name Market Access, are Europe-domiciled, they will soon be listed in Asia too. China Post Global plans to cross-list the funds immediately in Hong Kong. Shaun Cai, president of China Post Global, says the company hopes to sell the funds not only in Hong Kong but also in mainland China. The only question is how. One mechanism might appear to be the Mutual Recognition of Funds (MRF) scheme between Hong Kong and mainland China. ETFs are not yet eligible under the programme, which allows qualifying Hong Kong-domiciled funds to be distributed in mainland China (mainland Chinese funds enjoy the same treatment in Hong Kong). However, Chinese and Hong Kong regulators are widely expected to make ETFs eligible for registration soon. The problem is the MRF scheme is so far open only to Hong Kong or Chinese-domiciled funds and the new ETFs, being domiciled in Europe, would not qualify. “As far as we can tell, it would be difficult to use this route,” says Cai. 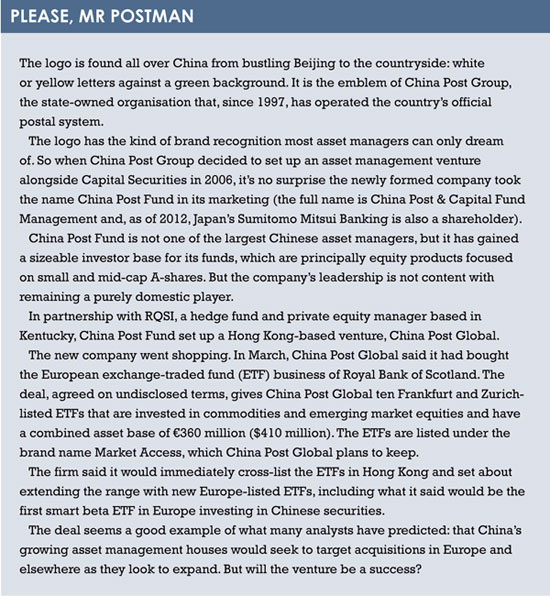 Another avenue could be the Shanghai-Hong Kong Stock Connect. Although ETFs are not currently included in this scheme, which allows mainland Chinese investors to buy Hong Kong-listed stocks and vice versa, there is some hope they will be added. Once the Market Access ETFs are listed on the Hong Kong stock exchange, mainland Chinese investors could buy the ETFs just like they currently buy stocks. Would this work? Cai says this mechanism shows promise but notes that regulators have yet to confirm they will add ETFs to Stock Connect. “It’s an ongoing debate,” he says. There are other options. Within China, the firm can sell the new ETFs to investors who have a quota under the qualified domestic institutional investor (QDII) scheme. The company’s parent, China Post Fund, has applied for its own QDII quota too. If it gets it, China Post Fund plans to offer a kind of global asset allocation product – in essence, a fund of funds – which would use the newly acquired ETFs as components. “It would be a feeder or wrapper to bring in flows,” says Cai. With China Post Fund’s sizeable distribution network in China, this kind of product has the potential to bring in large inflows of Chinese money to the newly acquired ETFs. There is a problem, though. Chinese authorities seem to have put the brakes on QDII and other outbound schemes. Although the local regulator claims quotas have not been suspended, there have been reports of delays in gaining approval. The successor scheme, QDII 2, and another outbound investment scheme aimed at hedge funds, the qualified domestic limited partnership (QDLP) scheme, are reported to be mothballed. Cai is optimistic about the newly acquired ETF platform, however. Although there are currently obstacles towards distributing the new ETFs in China, the acquisition has given China Post Global a foothold in Europe and a basis on which to build further assets in future. OBSTACLES
The difficulties China Post Global will face in distributing its new ETFs in its home market are instructive because they are in essence the same difficulties international firms face in trying to bring their products into Asia’s largest market. China is where the growth is, but getting foreign funds into China is difficult (see our roundtable on pages 28-33). It is no wonder, then, that international firms are instead distributing their ETFs in markets such as Korea, Taiwan, Hong Kong and, of course, Japan. ETF providers face challenges in these markets too, though, especially in the retail sector. One is that distribution of funds to retail investors in much of Asia is still largely controlled by banks, and ETFs, with their relatively low fees, are typically not profitable for banks to sell. Justin Ong, asset and wealth management industry leader at consultancy PwC, says it may take the rise of internet and mobile-based distribution channels, including so-called robo-advisers, to make ETFs truly popular among retail clients. “The distribution channel has to change. When we see adviser platforms coming in, that’s when ETF flows will grow,” he says. Regulation also stands in the way of some kinds of ETF in Asia. Leveraged and inverse ETFs, which allow investors to magnify returns by taking on debt or to take short positions on an index, are a popular choice for investors in Japan and Korea. In Taiwan, figures from the Taiwan Stock Exchange state that the overall daily trading volume of ETFs rose 45% last year, a result that consultancy Cerulli Associates attributes to the introduction of leveraged and inverse ETFs. However, in many Asian markets, including China, such products have not been approved by local regulators. The authorities in Hong Kong have signalled that they may approve them soon, which could allow Korean firms such as Samsung Asset Management and Mirae Asset Management to make a grab for assets in Hong Kong with new product launches. Other countries will have to wait. It may be governments that have the biggest influence. As Asian countries develop their pension systems in response to ageing populations, many observers have predicted a role for passive funds, such as ETFs, which can provide the ‘core’ of schemes that are likely to be of the defined contribution type. No one doubts the upward growth of assets for passive funds in Asia, but it seems the problems facing traditional fund distribution in the continent – fragmented markets, unhelpful regulation and capital controls in countries such as China – apply to ETFs as surely as they do to actively managed funds. The boom in this market, assuming it continues, will not happen without challenges. ©2016 funds global asia