Does the Year of the Pig bring prosperity or pain for China? 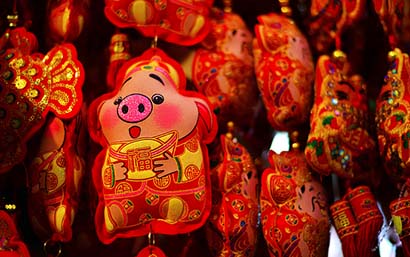 As China ushers in the Year of the Pig, the world’s second-largest economy is heading into the New Year with the prospect of further US tariffs on Chinese goods combined with its slowest pace of economic growth since 1990. Pigs are prized for finding truffles – but where are investors digging to unearth pockets of value from the Middle Kingdom during times of difficulty? Eric Moffett, Asian Opportunities Equity Fund portfolio manager, T. Rowe Price
The macro outlook in China continues to dominate investor thinking, with concerns laser-focused on the country’s slowing economic growth. While it has decelerated from the double-digit growth of a decade ago – levels unlikely to be seen again – it is still solid from a global standpoint. However, what matters most for many domestic stocks is not so much national GDP growth, but the GDP growth of households. Data shows disposable household income has increased significantly over the past ten years, despite the slowing economy. There are two reasons for this: demographics and policy. In terms of demographics, the pool of working age people in China has been stagnant for some years, but spending by this group continues to grow. On the policy side, the government has made a priority of delivering meaningful wage increases every year over the past decade, across every province in China. The income growth contributes to improved affordability for working-class families across a range of consumables – including holidays, insurance, healthcare and medical services. Valuations look very cheap, which is partly a reflection of the slowing growth/trade sanctions headwinds. The MSCI World Index is currently trading at a P/E of nearly 20x, well above the China A-shares market at 12x. This represents crisis-level valuations for an economy still growing faster than most places in the world. In the 15 years I have been investing in emerging markets, I have never seen greater inefficiencies than I see in the China A-shares market today. Fabrizio Quirighetti, head of multi-asset, SYZ Asset Management
The trade war came at an inopportune moment for China in 2018, just as the authorities were trying to regain control of the unrestrained growth of credit. However, we believe it is not an insurmountable challenge. The main risk for China is the authorities’ inability to halt the deceleration of growth observed over the last 18 months. Beyond the trade war, the ‘natural’ deceleration of Chinese growth, inevitable due to its current size and strong growth over the last 20 years, the transition to a service economy, an ageing population, and slowing productivity growth, represents the real challenge facing China. This is particularly true since past recipes for reviving growth, namely turning on the monetary taps or unrestrained public spending, can no longer be so generous because of the steep rise in debt in recent years. Courses of action are therefore more measured and targeted, resulting in less impressive effects that take longer to appear. We believe this year China should succeed in stabilising growth, at least temporarily, because unlike most developed economies, it still has room for manoeuvre. We must remember that a bit like Trump, the Communist Party closely follows the stock market, and will do ‘whatever it takes’ to prevent a further stock market slide. Craig Farley, lead manager of the Chindia Equity Fund, Ashburton Investments
With the MSCI China and the domestic Shanghai A-shares market currently returning 10.7% and 6.3% year-to-date respectively, market sentiment around China has moved swiftly from extreme pessimism to a more neutral, dare we say optimistic, outlook. Catalysts for the current equity market rally include the growing expectations of a positive outcome to the US-China trade tariff impasse and a softening US Federal Reserve rhetoric. This should result in a weaker US dollar, relative to Asian and emerging market currencies, which has historically been good news for China investors. Underpinning the equity market rally is a supportive valuation story. At current price-to-book levels of 1.48x, Asia ex-Japan is trading at close to a 15-year trough, relative to developed markets. Historically, MSCI China, at a current 1.6x price-to-book valuation, has generated a further 15-20% return, with 80% probability of a positive return over the next 12 months. While it would be remiss of us to ignore the potential for further earnings downgrades this year, since consensus for aggregate MSCI China earnings growth stands at circa 14%, for investors considering adding to, or introducing exposure to China, this represents a reasonable margin of safety. Views collated by Kaso Legg Communications. ©2019 funds global asia