Changes to licencing and ownership rules in the Chinese market are presenting opportunities for foreign asset managers to attract new investment flows from domestic investors, according to findings from Funds Europe’s China Investor Survey 2020, conducted in partnership with Standard Chartered. Previously, foreign asset managers could launch funds on the Chinese mainland via a private fund management (PFM) licence, or through the Qualified Domestic Limited Partnership (QDLP) scheme. Under the PFM scheme, foreign asset managers may enter into a joint venture with a domestic partner or establish a wholly-owned foreign enterprise (WFOE) that operates as a private fund manager, offering open-ended collective investment funds targeted at qualified investors (typically institutional and high net-worth) investors. In 2018, the Asset Management Association of China raised the ceiling on foreign ownership in a fund management joint venture on the mainland from 49% to 51%. 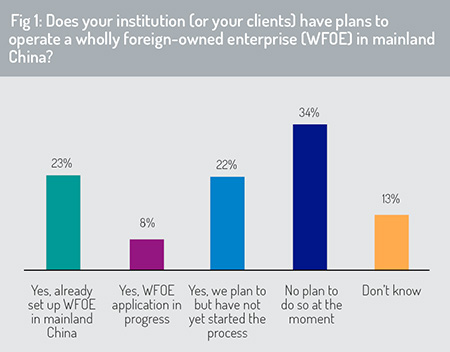 It went a step further in April 2020 by removing this ownership threshold, allowing foreign companies to own 100% of a fund management joint venture on the Chinese mainland. These rule changes also enable foreign fund managers to apply for a full fund management company licence which, if granted, will pave the way for fund sales to domestic retail investors. When asked how these regulatory changes have impacted their business development strategies on the Chinese mainland (fig 1), 23% of asset manager respondents from the survey said they have already established a WFOE (23%). A further 8% said they have now filed an application and 22% said they have plans in place to set up a WFOE (22%). For those asset managers setting up a WFOE, 45% said they will use this to operate a private fund management business . A further 36% said they will establish a WFOE to operate a Qualified Domestic Limited Partner or Qualified Domestic Investment Enterprise (QDLP/QDIE) business. Since the 51% cap on foreign ownership of investment firms was removed in April 2020, international investment managers including Blackrock, Neuberger Berman, Fidelity and Vanguard have filed applications to establish wholly-owned mutual fund subsidiaries in China. 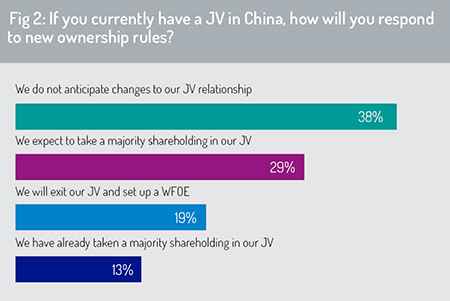 Various securities firms have increased their shareholdings in their existing China securities company joint ventures, including Morgan Stanley, Goldman Sachs and DBS. Blackrock’s wholly-owned mutual fund licence application was accepted in 2020, according to local sources. For foreign asset managers that have joint venture arrangements in place in the Chinese market, 38% said they do not expect to change their joint venture relationship in response to recent changes in ownership rules (fig 2). In contrast, over 40% of respondents said that they had already taken a majority shareholding in their joint venture, or they expect to do so in future. Few plan to exit existing joint venture arrangements and establish a WFOE in its place, with just 19% saying they would follow this course of action. Read the China Investor Survey 2020 report now » © 2021 funds global asia