ETFs: One of a kind

It was only a matter of time before the first renminbi-denominated exchange-traded fund launched, following the uptake of dim sum bonds. Stefanie Eschenbacher reviews market developments in Asia.

The new hang Seng RMB Gold exchange-traded fund (ETF) is the only one denominated in renminbi.

Such renminbi-denominated ETFs are a feasible channel for investors to utilise their renminbi deposits, which have been building up quickly in Hong Kong.

Rosita Lee, the head of investment product business at Hang Seng Bank in Hong Kong, says the rationale was to broaden the choice of renminbi investment products. “The market is always interested in renminbi-denominated products,” she says.

The fund currency is the same as that of the underlying investments, renminbi, which will minimise the currency risk.

Gold is valued in dollars so any appreciation would be reflected in that price.

However, if the dollar depreciates against the renminbi at the same time, this would have a negative impact on the performance of the fund and investors' returns.

Without hedging, less renminbi would be converted after receiving the dollar proceeds from selling gold.

“Under the currency hedging arrangement, if both the gold price and renminbi rises, which is what we investors expect, investors will gain through exposure of gold and currency,” she says.

The ETF therefore hedges against the foreign exchange rate movements between the renminbi and the dollar so its performance in renminbi will, before fees, expenses and other hedging costs, track the performance of the London gold fixing price in dollar.

Hang Seng Bank does not expect the ETF to be affected by the foreign exchange rate movements between renminbi and the dollar, but investors still face a foreign exchange risk when they realise their investment and convert the renminbi into other currencies.

“In the two years since the European sovereign debt crisis started, we have seen investors buying gold to use as a hedge against inflation, deflation and a safe-haven investment,” Lee says.

There are two other gold ETFs trading in Hong Kong, the SPDR Gold Shares and the Value Gold ETF. 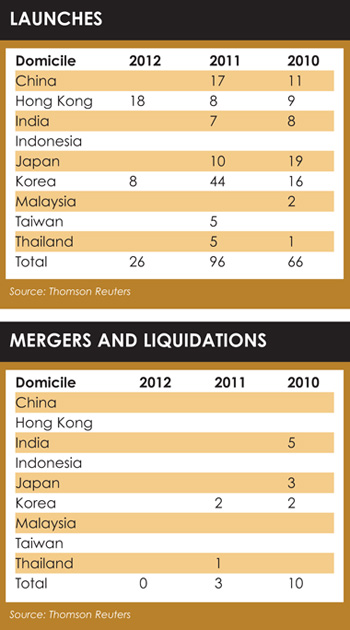 “There is still demand for our gold ETF, because it is the only one that is denominated in renminbi,” says Lee. “We chose gold because it is not restricted in terms of liquidity of the underlying market.”

The Hang Seng RMB Gold ETF was one of 26 products launched so far this year, according to Thomson Reuters. In the course of last year, ETF providers launched 96 products in Asia.

Hong Kong has topped the rankings of new launches so far this year.

Investment demand and changing regulations, such as further relaxation and advancement of the rules investing in China, are likely to be the key driver for this.

Renminbi qualified foreign institutional investment open-ended funds have launched in Hong Kong and a similar development for the ETF market is likely.

“At this rate, it looks like we will be able to catch up with last year, if not exceeding it,” Choy says. “Looking at the new launches so far this year, they were skewed towards emerging market country exposures.”

ETFs from db-X and Enhanced Investment Products have been particularly popular, she adds.

Most of the liquidity is still in the existing “giants”, says Choy. Those include, for example, the Tracker Fund of Hong Kong, which boasts $6,992.7 million, and the $6,387.5 million iShares FTSE A50 China Index ETF.

ETFs that track the performance of China’s A-shares market have been popular, Choy says, mainly because exposure through channels other than ETFs is limited.

Nick Good, managing director, head of iShares, Asia Pacific, at BlackRock, says the iShares FTSE A50 ETF is his “flagship” product for Asia.

Physical ETFs are preferred across the board, Good says, the exception being synthetic ones that track the performance of the A-shares market.

“The iShares FTSE A50 ETF is synthetic, but it is very apparent to investors,” Good says, adding the regulator in Hong Kong has specific requirements in terms of disclosure.

Good says there has been no decline in interest for this particular ETF as a result of the criticism synthetic ETFs have received elsewhere.

Even though Asia’s ETF market has seen more interest in recent years, Good says it remains fragmented and there are long-term barriers to growth.

There are still 42 ETFs domiciled in Hong Kong with less than $50 million of assets under management, according to Thomson Reuters, the size typically considered to make it economically viable. And 16 of these have less than $10 million.

While many investors in Asia pursue investment strategies aiming to generate short-term returns, Good says interest in fixed income, dividend and long-term generation of yield has picked up.

At Hang Seng Bank, Lee is optimistic about other such products. “Our decision whether to launch an ETF depends on the depth of the underlying market,” she says. “We have not been able to identify a market, other than gold, that meets our criteria.”

The uptake of other renminbi-denominated products largely depends on investors’ expectations for a potential currency appreciation, which has been scaled back in recent months.