China is a country of great numbers. But Stefanie Eschenbacher discovers some have lost their magic for investors.

Chiffrephiles – lovers of figures – will feel a special attraction to China.

Angus Maddison, a world scholar on quantitative macroeconomic history, coined the term when he published Confessions of a Chiffrephile, an essay in which he explains his love affair with numbers.

Just a few days before Maddison’s death in April two years ago, Robert Zoellick, president of the World Bank, mentioned his numbers in a speech declaring the end of the “third world”.

According to Maddison, Asia accounted for over half of world output for 18 of the last 20 centuries.

Today, China is the world’s most populous country, has the largest foreign reserves and may overtake the US to become the biggest economy as early as this decade.

These numbers, however, have lost some of their magic, at least for investors. While China’s economy has been growing at double-digit rates, stock markets have disappointed in recent years.

The MSCI China Index returned 62.7% over the past five years, 32% over the past three years but lost 8.9% over one year, data from Morningstar shows.

While the MSCI China Index outperformed the MSCI Emerging Markets Index and the MSCI World Index over five years, it dramatically underperformed over one year.

“It is difficult to make money,” says Chan. While there is a lot of competition for high-quality stocks, China has also seen large inflows of money.

Abundant global liquidity, much of which was pumped into markets by the European Central Bank and the Federal Reserve, has flown into emerging markets, which caused asset valuations and inflation to rise.

“We expect policy to ease, rather than further tightening,” says Chan. “The downside is very limited. This year, economic growth will slow down, inflation will get under control and the stock market will do better.”

There are other reasons, though, why Chinese companies have not performed as well as expected. Chan points to corporate governance issues, accounting and management.

Marketing of many emerging market funds, however, has long centred on economic growth, favourable demographics and a healthy deposit of foreign reserves. 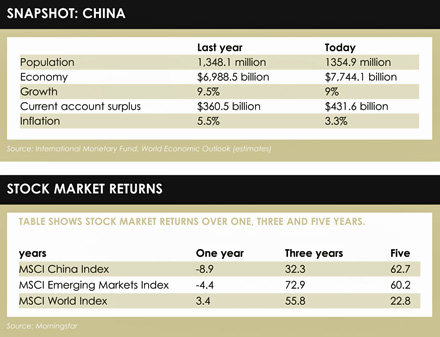 Having studied 100 years’ worth of data from 19 different markets, Paul Marsh, Mike Staunton and Elroy Dimson, co-authors of Triumph of the Optimists, even conclude that there is a “slightly negative correlation” between economic growth and stock market returns.

This mismatch has been particularly stark in China.

“We need to find companies with a mindset to generate profit for shareholders,” says Stapleton. “We need to have discipline as well. If a stock has reached its full valuation, we have to trim it back.”

First State Investments offers a China A-shares fund for its existing clients, though Stapleton adds that it is about to be opened to new clients.

Chan and his team buy mostly H-shares, even though they can technically invest in A-shares and there is more choice in China.

Liquidity is superior and Hong Kong is “closer to home”, Chan adds.

In fact, the World Economic Forum declared Hong Kong the most developed financial market in its latest Financial Development Report 2011.

More choice than ever
The location of a stock’s listing is no longer a decisive factor for some investors because many international companies derive their earnings from the Chinese consumer.

Cho points to luxury brands, such as Prada, Louis Vuitton and Chanel, which all have a striking presence in Hong Kong and are benefiting from Chinese tourists.

In terms of investment opportunities, Cho says there is more choice today than ever before. She adds that international companies are often more liquid and offer a more compelling risk/return ratio.

Chan is bearish on consumer stocks, utilities and telecommunication companies, adding that he finds more opportunities among automakers, shipping and technology companies, as well as financials and industrials.

What makes China’s numbers so attractive is that they suggest great potential.