Ping An of China Asset Management (Hong Kong), which manages the overseas investments of China’s second-largest insurance company, Ping An Insurance, received the largest quota among its peers.

China Life Insurance, the country’s largest insurance company, revealed plans to outsource the management of $3.2 billion of assets and organised a three-day event in April in Beijing to search for an asset manager.

There are large mandates like those to be picked up, but most opportunities for international asset managers will be in the mid-tier segment.

The size of their initial quotas will also be too small to set up asset management divisions dedicated to managing overseas assets, as large players like Ping An Insurance have done.

Sunshine Life, a mid-tier insurance company, awarded a sizable portion of its $1.2 billion quota for overseas investments to UBS, though neither Sunshine Life nor UBS was prepared to comment on the mandate.

Shanghai-based consultancy Z-Ben Advisors writes in a recent research note that these insurance companies are “redefining what it means to be aggressive in 2014”. 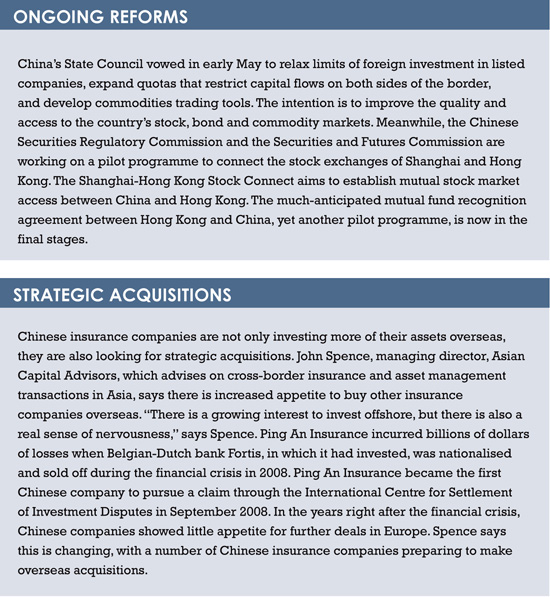 Elsewhere, Anbang P&C and Sino Life have made aggressive moves in the secondary market by taking stakes in banks.

Ivan Shi, senior manager, research, at Z-Ben Advisers, adds that a lot of portfolio managers and senior executives have moved from asset managers to insurance companies, attracted by a much larger pool of assets.

The China Insurance Regulatory Commission caps insurance companies’ overseas investments at 15% of their total assets, but this may change soon.

Chinese insurance companies have long been subject to rigorous restrictions, but recently they received more flexibility with their domestic investments.

Shi says insurance companies have significantly increased investments in a category referred to as “others”, which includes infrastructure and trust products. Data from Z-Ben Advisors shows that exposure to these products more than doubled to 13% of total assets over the past year.

Shi adds that once Chinese insurance companies increase their overseas investments, it is likely that a lot of money will flow into alternative assets overseas.

Shi estimates that the combined overseas investment of the Chinese insurance industry ranges between 1% and 2% of their total assets, which is somewhat close to the quota that has been awarded.

The total quota awarded to Chinese insurance companies for overseas investment is $28.103 billion. Although there is no data on how it has been invested, Shi says a lot has probably ended up in Hong Kong.

E Fund Management (Hong Kong) has used less than a tenth of its quota, which Peng Fei, managing director, global investments and qualified domestic institutional investment, puts down to a lack of investor interest and limited channels to sell overseas funds.

Its total assets under management are $43 billion and the quota is about $4 billion.

“We have a huge amount of quota left,” Fei says. “In the beginning, investors got enthusiastic about buying funds that invest overseas, but they got hammered by the financial crisis and lost confidence.”

This appears to be changing. Among those insurance companies that have quotas, Shi has observed an increased interest in overseas investments since last year. When it comes to asset allocation, he says, they are influenced by the allocations of sovereign wealth funds.

The China Investment Corporation, which is responsible for managing the country’s $3.44 trillion of foreign exchange reserves, has made substantial overseas investments.

This has been encouraged by Beijing’s political elite. During the Third Plenum Meeting last year and the recent National People’s Congress, the Chinese Communist Party declared overseas investments a priority.

“There is a general attitude from top-level industry and government officials that now is the time to go overseas, the time to rethink investment strategies,” Shi says, adding that different regulators are making an effort to facilitate these ambitions.

A DESIRE
Cathay Conning Asset Management provides asset management solutions for institutional and insurance investors in the Asia Pacific region. Its US-headquartered parent Conning is one of the largest asset managers for the insurance industry worldwide and has $85 billion of assets under management. Konyn says there has long been a desire among his clients to diversify their assets away from the rather narrow set of options domestically, but he plays down the immediate opportunity for international asset managers. 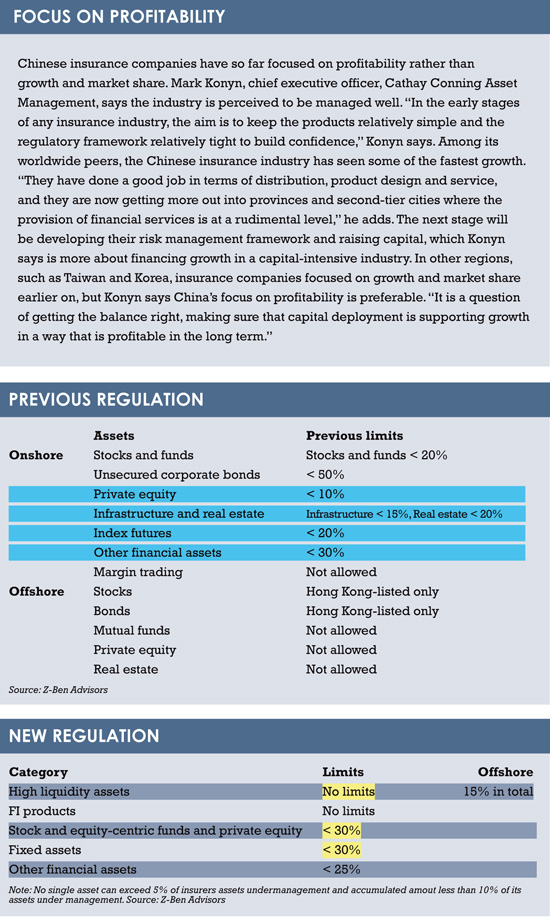 Chinese regulators have made many announcements over the years, promising that they will facilitate more overseas investments. “The experience has been rather disappointing,” Konyn says.

Approvals are given on a case-by-case basis and there are provisions – a solid risk management framework and capital adequacy standards.

The China Insurance Regulatory Commission approved more asset managers specialising in insurance assets in the past year, bringing the total to 20, from nine.

Ping An of China Asset Management (Hong Kong) was set up in 2006, as a wholly owned subsidiary of the Ping An Group, with the responsibility of profiting from overseas investment. Ping An Insurance’s losses in a deal with Fortis amounted to billions of dollars. Nevertheless, it is venturing overseas again.

Mak says the ambition has always been to be more western in its setup, and in recent times he has been focusing on building new relationships with European asset managers.

“Previously, we were not explicitly allowed to invest in overseas markets other than Hong Kong directly, but now we are starting to focus on the non-Hong Kong and China market,” Mak says. Less than 3% of its 29.68 billion Hong Kong dollar ($3.8 billion) of assets are currently invested overseas; Mak says there are plans to increase this, but the decision lies with the headquarters in Shanghai.

“It was difficult to increase the allocation to overseas markets when the renminbi was appreciating because overseas investments would lose out on the currency appreciation.”

But after years of slow and steady appreciation, the renminbi has suddenly lost value against the dollar. The renminbi had fallen to 6.2676 a dollar in May, its lowest since October 2012.

Even after the US warned China over the depreciation of the renminbi, it seems unlikely China will intervene. Chinese exports are becoming more competitive, and the depreciation comes when the world’s second-largest economy is gasping for growth.

Fei adds that the Chinese markets are becoming challenging for asset managers. “The depreciation has brought panic to the market and investors are finally realising that the renminbi is no longer a one-way bet on appreciation,” says Fei. “If overseas markets keep their momentum, the Chinese will be afraid of being left behind.”

Much of the quota awarded under the scheme, intended to help Chinese asset managers to diversify, is thought to have ended up in Hong Kong. While Hong Kong is a natural first step, it defies the scheme’s purpose – more than half of stocks there are China-related.