The decisions sharia boards make can be powerful. Murat Ãnal of Funds at Work tells Stefanie Eschenbacher that there is a need for a more transparent and objective system.

Islamic finance is a small world. Since 2008, Murat Ünal, chief executive officer of Funds at Work, has been analysing and interpreting how sharia scholars work.

His research covers 34 countries, 1,407 board positions across 400 financial services institutions. However, the same names appear over and over again in the rankings of most influential scholars. His work suggests that power is shared between a few scholars; those who set the standards and govern the industry are the same as those who sit on boards of financial institutions; and that the industry is far from transparent.

“Their visibility and credibility gained through these institutions impact their boards in Islamic finance institutions – and the other way round,” Ünal says.

Over half of the global board memberships – well over 700 positions – are shared between 17 scholars who sit on the sharia board of the Accounting and Auditing Organization for Islamic Financial Institutions, the standard setter in Bahrain.

Ünal says status and visibility makes up for the lack of proper corporate governance as financial institutions look for the “rock stars”. He adds: “Here, of course, the question arises whether the scholars in Islamic finance institutions should be the same as the ones in more regulatory functions, specifically based on the prior evidence about their impact.”

He says it is not only about how many, but specifically which positions they hold. Two scholars, for example, can sit on ten different boards and have different influences. This depends on how central they are within the network or to which other powerful scholars they are connected.

The problem lies in defining influence. Ünal found that factors such as personal relationships, a network and hierarchy play a crucial role. Board memberships among influential scholars are shared. The top five scholars even share up to 60% of their board memberships.

Ünal says this is no surprise and leaves littler room for other scholars to come in. “It is a tight network and not really accessible,” he says. “Memberships are handed down to family members or friends.”

This raises questions if regulators or standard setters – which tend to vary greatly from country to country in their approach – can, and should, limit the number of board memberships. Pakistan, for example, has limited it to one. Yet Ünal says this may have created an incentive for scholars for country arbitrage by offering their services elsewhere in the Islamic world.

Malaysia, too, has limited it to one in a given category, such as asset management or insurance. “The same arbitrage activities can be seen there as well where one specific scholar has almost 40 board memberships outside the country,” he adds.

The Accounting and Auditing Organisation for Islamic Financial Institutions is seeking to cap at a much higher number, but in Ünal’s view the number of board memberships is not the crucial point as scholars have different capacities and differ in their way to organise. 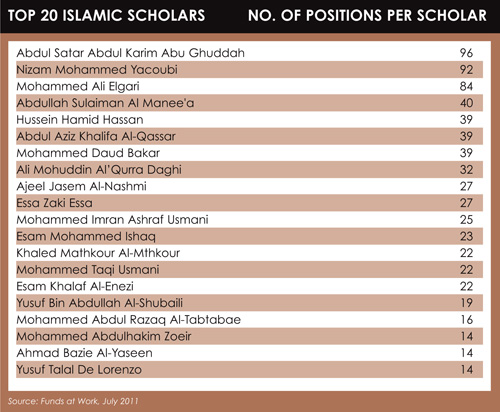 Ünal says it needs to be differentiated whether a scholar is involved with a standard setting board as limiting their involvement in financial services companies makes more sense to ensure that the governed are separate from the ones that govern. “Sharia scholars have influence on the management and can veto investment decisions if they are not in compliance with sharia,” he says. “The decisions they make can be powerful.” He adds that an Islamic financial services institution cannot even be set up without a board. “There is an additional layer of governance in Islamic finance, namely the sharia board, which complements the executive and non-executive directors.”

Ünal says sharia boards should also consider whether there should be a limitation in terms of years to board membership and whether rotation should be institutionalised to provide innovative ideas. “This should also ensure succession and transfer of knowledge,” he adds.

Even though rules are becoming tighter, research from the International Sharia Research Agency in Malaysia shows that new scholars are mainly recruited on the recommendation of existing scholars.

Ünal highlights cases where board memberships have been passed on from father to son or a qualified scholar was vetoed because scholars at a country-level sharia board “did not like him for his past behaviour relating to criticising the established elite”.

Only in Malaysia has Ünal found female scholars. “There are so many potential scholars, at least 600, according to our latest data,” he says. “Why don’t we make the terms and objectives of a hiring process transparent? Creating a system with more objectivity would make a huge difference.”

Today, there are 150 universities involved in training sharia scholars, but Ünal says it is unclear which ones are recognised. “The concentration among the senior scholars hardly allows for thorough mentorship and apprenticeship programmes as supported by regulators as the same senior people sharing the board,” says Ünal, adding that they are not able to pass their collective wisdom efficiently on to the next generation.

Other than corporate governance issues, Ünal says having a sharia board adds another layer of costs and can have a negative impact on performance.

Salaries of scholars are typically not disclosed, but Ünal estimates that investment companies with three scholars on their board will pay up to €1 million ($1.3 million). “Having a sharia board adds an additional layer of cost and and additional layer of governance to the fund,” he says. “A fund will have to be quite successful and of reasonable size to cover those expenses.”

Ünal says costs for sharia boards tend to be higher than those of other corporate governance boards. Environmental, social and governance factors typically do not focus on financial criteria.

Ünal advocates more transparency when it comes to scholars’ pay, especially listed companies where shareholders have a specific right to ask for greater transparency. For example, these sharia boards do not usually publish minutes of their meetings.

In the end, his research raises more questions than it answers.