Assets of sharia-compliant funds and conventional funds are still commingled in Indonesia, but custodians say that as Islamic finance grows they might be asked by the regulator to separate the two. Stefanie Eschenbacher looks at the custody business.

Indonesians living in Jakarta have their own word for traffic jam – macet. And macet lasts the whole day.

This traffic is typical for emerging markets like Indonesia. The McKinsey Global Institute forecasts that the country will have added 90 million people to its consuming class by 2030, more than any other country, except China and India.

Unlike other Asian economies, Indonesia has grown as a result of consumption, not manufacturing and exports. Domestic consumption and productivity growth could lead it to become the seventh-largest global economy by 2030. Yet there are less than 300,000 investors in a population of 246 million, the largest in Southeast Asia.

Indonesia’s assets under management, about $16 billion, are meagre, and the share of sharia-compliant assets is, at $809.5 million, is even smaller.

Data from Lipper, however, shows that assets under management have grown rapidly, from $147.8 million in 2008. This has caught the imagination of asset servicers in the region.

“Sharia-compliant funds have been around for 15 years, but it is only in the past ten years that custodians have thought about how to capture these opportunities.”

With growth comes regulation, though. The evolution of sharia may mean the eventual separation of sharia assets from conventional assets.

“If Deutsche Bank becomes bigger, I would not be surprised if the regulator asks us to separate the sharia business.”

John Mason, business development director for South Asia at State Street Global Services, says this separation has already happened in other jurisdictions. “Where pragmatic, we are able to provide segregation of Islamic and conventional assets on an account level as opposed to holding the assets in an omni structure.”

He adds that the extent to which such segregation can be offered largely depends on the regulatory framework of a country and its market infrastructure. Karyadi notes that the separation of business entities between conventional and sharia business should happen on a bank level, not just for custody services. “It should be whole-bank strategy.”

REGULATORY PUSH
Ginung Pratidina, vice president, head of securities and agency services, at PermataBank, says there is no written rule that the administration of conventional securities by the custodian bank must be separated from the sharia securities.

This is different from banks, where the recording of third-party funds should be separated between the conventional and sharia. Pratidina says the techniques of management in sharia banks are different with the conventional banks, both sides in its funding and lending.

Whereas custodian banks are only administering securities.

For them, the recording technique does not differ between conventional and sharia securities.

However, if the custodian bank will administer the sharia fund, that custodian bank must obtain a sharia certificate from the National Sharia Council first.

“There has been no major growth in the sharia custody segment yet, but once we see such growth there will be a push for regulators to issue separate licences,” he says.

Most financial transactions in Indonesia still happen through conventional channels.

The largest difference between servicing sharia-compliant funds and conventional funds is the use of halal – or lawful – instruments.

The main difference when it comes to servicing sharia-compliant funds centre on reinvesting cash. Indonesia has standardised the process to some degree. Its National Sharia Board, an autonomous body that supervises sharia-compliance, decides which equities and bonds are permissible for cash reinvestment.

Of the 500 companies listed in Indonesia, about 300 have been deemed sharia-compliant by the National Sharia Board.

This makes the process easier than in Malaysia, where every cash reinvestment needs to be approved by an in-house sharia board.

MIXED MESSAGES
Dixit, though, says reporting on sharia-compliant funds is a challenge because these reports have to be placed manually.

“We work with asset managers to increase the level of automation. Volumes are not large enough to apply automation this type of reporting, but we are looking into it.”

He adds that Swift, a bank-owned messaging network, does also not support Islamic tagging.

Swift says its users can provide statements for any transactions that need to be sharia-compliant and that there is no mandatory requirement to use fields within the Swift message that are not compliant with sharia law. 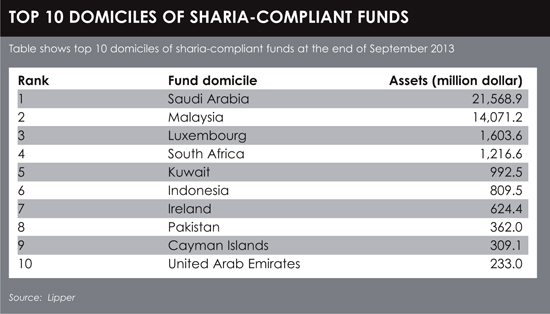 If a corporate action is happening and custodians need to send a message to their clients, Dixit says it has to be sent in a different message.

Such messages cannot include any references to interest or dividend payments.

Mason says that although Swift tagging would be an “enhanced feature”, its current limitation is not a barrier to providing electronic statements for underlying clients.

The operational setup at the start of a relationship between an asset manager and a custodian establishes clear processes for the treatment and safekeeping of sharia-compliant assets.

Asset managers of sharia-compliant funds are not allowed to accept riba – or interest – and if riba does occur, it has to be purified.

Funds are only allowed to invest into sharia-compliant equities and bonds, but as some of these transactions go through conventional banks they sometimes incur interest. This is usually given away as a charitable donation.

While critics of Islamic investments have long argued that sharia-compliant funds miss out on the opportunity generate an extra return, Karyadi says the percentage is small and asset managers have given non-sharia permissible income to charity, thereby improving their image.

“We can help asset managers to take decisions, but ultimately the responsibility lies with the asset manager,” he says.

Specific to the Indonesian law, Paranjape says those who provide custody services need to provide “the whole package.” This is a market where custodians can offer consolidated services so the ability to increase what they can do for a fund is bigger in Indonesia.

He adds: “The challenge is that it is such a scale-oriented business and if it is not a global platform, it becomes difficult.”

Mason says the prospect of offering transfer agency and administration services together with custody is “enticing” because this means providers like State Street could leverage on the capability
of its global platforms.

The requirement of providing a bundled solution also means that having the appropriate transfer agency and administration licenses, and on-the ground resources, is a prerequisite for service providers to compete in the mutual fund servicing business in Indonesia.

Mason adds: “Before the decision is made to put resources on the ground, more in-depth research is required to understand the Indonesian market’s nuances and explore how we can achieve economies of scale with our global operations.”

Although mutual fund penetration is low, Mason says the Indonesian fund market has potential for high growth and one of the driving factors is the emerging middle class.

Many Indonesians continue to keep money in bank deposits, although asset managers are stepping up efforts to market funds. Mason says he expects measures to expand the market.

Only relatively simple products are approved for local investors and products such as exchange-traded funds and real estate investment trusts are in the early stages of development.

He says as the Indonesian investor base becomes increasingly sophisticated, there will be a demand for more innovative products and further access to international markets.

COMPETITION
Rudy Tandjung, commissioner, central depository, at the Indonesian Securities Central Depository, says there is not much difference between providing custodial services to sharia-compliant fund and conventional funds. “Most improvement needs to come from the investment manager, not from the custodian. The past years have seen double-digit growth, although it is coming from a low base, and we expect this to continue.”

He says sharia-compliant funds still account for only a fraction of the already small fund business in Indonesia. “There was an effort to create something more specific but, but any marketing for custody services is done with conventional banks.”

The custody business in Indonesia is mostly shared among a few global players. Though Tandjung says the local market is still widespread and there is place for niche players.

Local banks often leverage their capabilities on the distribution side, meaning they get custody of an asset manager’s funds in exchange for distributing their funds.

Tandjung says: “There are pretty much the same players as there were five years ago, but competition is increasing among existing players in terms of services and pricing.”