INSIDE VIEW: The Modi effect 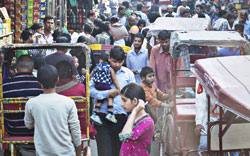 Potential changes in governing power in places like India tend to be addressed in steps by investors. Peter Laurelli of eVestment says these steps coincide with the phases before, during and after a democratic populationâs decisions are made and the results known.

Uncertainty, speculation, commitment and reaction are all measurable characteristics of investors as they consider exposure to a country, and by the fiduciaries managing their assets.

Through interrogation of our data we have provided a detailed insight into the sentiment of both institutional investors and their asset managers during each phase of India’s historic election, gauging whether the right decisions were made.

While the world watched the largest election in history, institutional investors were actively deciding how much exposure to accept, considering the varying potential outcomes.

To measure investor sentiment through the whole election process, it is best to first understand who the major institutional investors in India are.

There are two equity universes, strategies that focus solely on India and those that have overweight exposure to India, which we have defined as greater than 15% of the portfolio dedicated to the country.

Investors based in continental Europe have the greatest exposure to India-focused strategies, followed by the US and investors in Japan.

Managers reported nearly $11 billion of institutional assets dedicated to India near the time of the election. There was an additional $13 billion in Indian equities managed by strategies with overweight exposure to the country, primarily for investors based in the US.

Institutional exposure to India’s fixed income markets is relatively small. We track 43 products with any India fixed income holdings, with an average portfolio exposure of nearly 6% and accounting for only $3 billion of country exposure.

Leading up to the elections, there appeared little interest from investors to increase their dedicated exposure to the country. Beginning in the third quarter of 2012, and increasing to a peak in the second quarter of this year, institutional investors persistently removed money from strategies targeting India.

Conversely, strategies with overweight India exposure continued to gain new assets, albeit at a declining rate leading up to the election, but they too saw elevated redemptions in the quarter immediately preceding the event.

While it is clear the institutional investment community was concerned heading into the elections, exactly where this concern was greatest sheds light on differing regional tolerances towards geopolitical uncertainty.

It makes sense that the largest owners of dedicated India exposure would account for the largest redemptions during a period of outflows, but it is interesting to see Asia-domiciled investors, who account for relatively little overall exposure, made up an outsized piece of the negative sentiment.

Similarly, it was investors based in Africa or the Middle East who reduced exposure the quickest from strategies overweight India immediately preceding the election, while US-based accounts appeared more willing to wait on the sideline with relatively small redemptions compared to current allocations.

Since the election, sentiment has quickly shifted to the positive. The election of Narendra Modi of the Bharatiya Janata Party to prime minister was widely celebrated as a victory for the economic development of India, and investors have since responded favourably.

For strategies overweight India, institutional interest returned quickly to levels seen in 2012 and outflows from products dedicated to the country’s equity markets have abated.

Even European investors excluding those in the UK, after two years of persistent redemptions, have again begun to show faith in India’s markets.

Sentiment from US-based investors returned to positive, and even entities in Africa or the Middle East, which had quickly reduced exposure, returned in the third quarter of this year.

There was clearly enough uncertainty surrounding the elections to drive money away, yet post-election sentiment was positive enough to quickly attract new investors.

Those managing strategies dedicated to India do not have the option to temporarily shut down and reopen, but instead must position their clients’ assets in such a way to best take advantage of their expert perspectives on the events.

To determine how dedicated India strategies prepared for, and have reacted to the historic event, we can use our analytics to aggregate a strategy’s characteristics to see if risk-averse tendencies emerged, where positions were being built or reduced and how quickly.

There had been noticeable trends in two characteristics, which indicate active preparation for an uncertain event. First, the average holdings within portfolios had been in decline until the fourth quarter of last year, after which it began to increase, eventually spiking in the third quarter of this year.

Selling positions without adding more fits with the idea that managers were preparing to reposition while awaiting results.

Additionally, annual turnover within portfolios fell to the lowest level ever reported to us, dating back to 2005, but spiked shortly after results were known.

Again, this is evidence that asset managers were waiting to re-position client assets until the future was clearer.

With the knowledge that positions were being sold leading up to the election and turnover accelerating only after results were known, we should expect to see the sector positioning of dedicated India strategies to reflect where they felt safest leading into the event and where they anticipate the greatest opportunities afterwards.

Exposure to providers of discretionary goods was on the rise until the beginning of 2013, and then remained unchanged until election results were known. Exposure resumed its rise after the election.

Asset managers appeared to take a wait-and-see attitude towards a Modi victory, then bet for continued rise of discretionary consumption under his leadership. After a persistent rise, healthcare exposure was reduced dramatically in the quarters immediately preceding the elections, however, it is one segment which appears to have drawn immediate interest under the new government.

The financial sector accounts for the largest portion of India-focused portfolios.

This exposure did not shift much in advance of results, but has been reduced post-election.

Lastly, exposure to industrials, the third-largest sector within India-focused portfolios, had been in decline from at least the beginning of 2010 until mid-2013.

Along with consumer discretionary, industrials appear to be of renewed interest under the new government.

The election in India provided a window into how the institutional investment community reacts to a major geopolitical event.

We saw uncertainty expressed in the movement of assets and conviction in their return. We also saw asset managers pare down their portfolios and react swiftly once the future became clearer.

Peter Laurelli is the vice president of research at eVestment