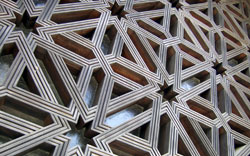 Sovereign sukuk issuances are difficult to pull off, even if there is a genuine will on a political level to embrace Islamic finance. Stefanie Eschenbacher finds Hong Kong, Luxembourg, the UK and South Africa are challenging the conventional.

The sovereign sukuk issuances of Hong Kong, Luxembourg, the UK and South Africa recently were nothing short of a publicity coup for these countries, as barriers to growth in Islamic finance remain difficult to break down.

“The biggest challenge is the mindset,” says Noel Lourdes, who leads the European advisory division at Amanie Advisors, and who has spoken to treasury departments of sovereigns.

Even if there is a genuine will on a political level to embrace Islamic finance, sovereign sukuk issuances often fail at the treasury level. 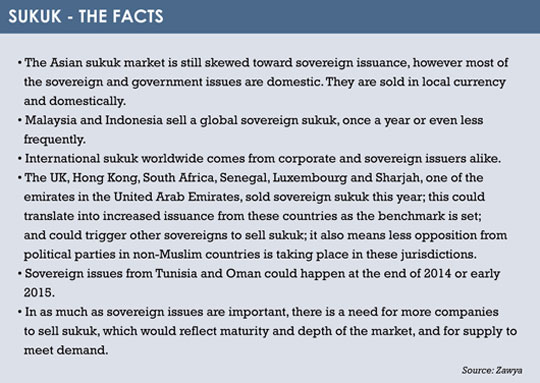 “These people have no incentive to think outside the box, they do not work in the private sector where they are always challenged to improve and do something different,” says Lourdes. “In the public sector, that incentive is not there so they keep it safe.”

“These are highly rated, developed economies and they can meet their financing requirements in the conventional market,” says Ali, adding that they were likely one-off issuances. Ali says the likes of Hong Kong, Luxembourg and the UK simply wanted to demonstrate that the legal, regulatory and tax systems are ready, and that they welcome Islamic finance. 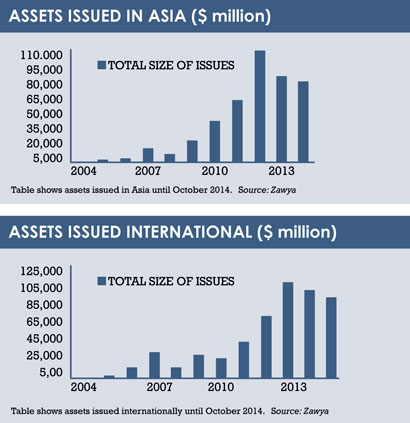 “Singapore is a global financial centre, which does have its borrowing requirements, and wants to find its place in the Islamic finance world [but] has been struggling to fit in because Malaysia has stolen the march,” says Lourdes. “We have always been waiting for Singapore, and are still hoping they will do it.”

Michael P. Grifferty, president of the Gulf Bond and Sukuk Association, says Hong Kong, Luxembourg and the UK are promoting their own value proposition for both sukuk and other kinds of Islamic finance instruments. The case of South Africa, he adds, was probably different in the sense that the issuance was more about diversifying the investor base. “Some of these issuances may repeat, but whether they have enough of a funding requirement to sustain an issuance programme, is another question,” Grifferty says. “They certainly want to keep their conventional yield curve fresh, that would be a priority, and they would not want to derail their conventional issuances.”

REAL ASSETS
Sukuk represent ownership of real assets, whereas conventional bondholders own debt. Sovereigns need legal and budgetary authorisation from the treasury to issue sukuk, and address the issue of state property, if a structure such as Ijara is used.

Most sovereign sukuk are structured in the form of an Ijara structure, an Islamic leasing contract representing one of the most common modes of finance practiced. In recent years, different types of structures have emerged, including some that allow a lower percentage of the sukuk to be covered by assets.

In the case of Luxembourg, the €200 million sovereign sukuk was backed with €200 million worth of assets while Qatari mobile phone company Ooredoo used air time and network capacity as an asset, and Goldman Sachs used parts of its commodity business.

“It is a developing field and new structures are coming to the market,” says Hani Ibrahim, head of debt capital markets at Qinvest, which helped to issue Ooredoo’s sukuk.

If state property is used in financing, as it would be in the case of an Ijara structure, there are further barriers. “The state property itself has to be free and clear, and there is only a limited number of assets that are eligible and appropriate to use in these transactions,” Gifferty says, adding that it is often difficult to win over all those in government who have sign-off.

“They may not see the benefit, they may only see the risks or things they do not understand, so that process takes a lot of time.”

Surplus countries are particularly reluctant to issue any form of debt, be it conventional or sukuk, but Gifferty says such issuances are necessary to set up a yield curve. Saudi Arabia has not issued a sovereign sukuk, despite having fully embraced Islamic finance, and holding considerable Islamic assets.

Ibrahim says resistance to issue sovereign sukuk is usually strongest among those that have never done so. “The first one is always the hardest to put together from a legal and structuring perspective because there is a certain legal framework that needs to be able to support the issuance of sukuk,” Ibrahim says.

Assets need to be transferred into a special purpose vehicle and various other arrangements around the leasing and transfer of those assets need to be established. In most countries, those transactions and the cash flows around sukuk incur taxes.

“The challenge is to have an equal treatment for sukuk versus what the bond would be treated as from a tax perspective – because the bond does not have these asset issues, it does not incur taxes,” says Ibrahim. 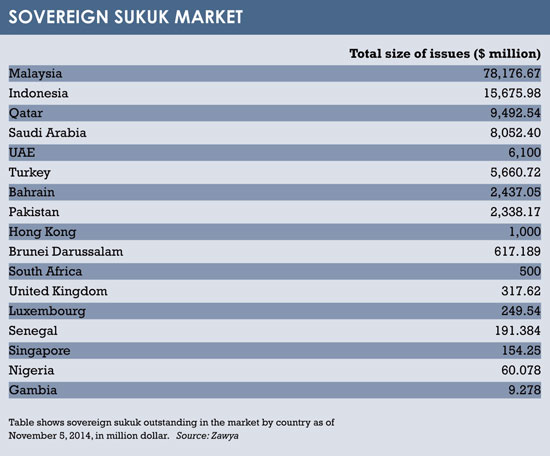 “Not only do we have more diversification by country or sector, increasingly also by capital structure,” Kronfol says. “The international market continues to grow in a healthy manner, and all the indications support the view that this should persist.”

Kronfol says sovereign sukuk issuances out of Indonesia, Turkey the United Arab Emirates and the UK have made compelling investment opportunities, but those out of South Africa and Hong Kong less so – because of market timing and relative value.

“The issuances from Hong Kong, Luxembourg and the UK are extremely highly rated, and pretty much trade in line with the existing conventional bonds of those countries,” Mohan says, adding that there is hardly any trading and no room for further spread compression.

There is a case for AAA-rated sovereign sukuk, especially for banks that are starting to think about Basel III and increasingly seek liquid assets that can be put up as collateral. The wider Islamic investor base, however, is just as yield-starved as their peers who invest in conventional bonds.

Lourdes adds that investors in Islamic finance need to become more flexible when it comes to credit ratings, because there are few sovereigns that are investment grade.

“The conventional market is far more open to accepting sub-investment grade offerings, whereas in the Islamic capital market investors are not as flexible,” he says. “Many sovereigns want to issue sukuk, but find that investor risk appetite for everything rated less than BBB- is significantly diminished.”

Pressure comes also from quantitative easing; even though the US has tapered off, it is still on the agenda in the UK, Europe and in Japan.

Quantitative easing floods the conventional capital markets with huge amounts of liquidity, which drives down pricing.

The Islamic capital market does not have quantitative easing, and Lourdes says it cannot compete with “false money”.

Lourdes says that there are companies that are now rated lower than they were before the collapse of Lehman Brothers, and they can now borrow cheaper than before the financial crisis when they had a higher rating. “Islamic capital markets cannot compete with quantitative easing, which is a big challenge,” he says.

The Franklin Templeton Global Sukuk Fund has always had a significant allocation to the countries that belong to the Gulf Cooperation Council (GCC), although Kronfol has recently reduced that allocation to diversify further.

“Our portfolio is a little bit more global than those of many of our peers, and we definitely want to take advantage of the exciting development story that is happening in the global sukuk space,” he says.

“Our GCC core allocation is now complemented by emerging markets and some of the more recent issuances.”

Mohan adds that South Africa may inspire others in sub-Sahara Africa to issue euro- or dollar-denominated sovereign sukuk, such as Ethiopia, Ivory Coast, Kenya, Senegal, Tanzania, Uganda and Zambia.

These countries can take comfort from the fact that there has been a lot of demand for the South African sovereign sukuk. “The South African issuance will do best when it comes to helping other countries or corporates to enter the space,” he says.

The next issuances are likely to come from Middle Eastern, non-Gulf states.

Most sovereign sukuk has traditionally been issued by Malaysia, but the Middle East is catching up. “Malaysia has been the pioneer, the leader in sovereign sukuk,” Lourdes says.

CIMB and Maybank are increasing their footprint in the Asean region, but Lourdes says Thailand and other Asean countries could follow. “The big hope everybody has is Singapore,” he says. “It is a AAA-rated country, with a great economic story, and its papers are always in demand.”